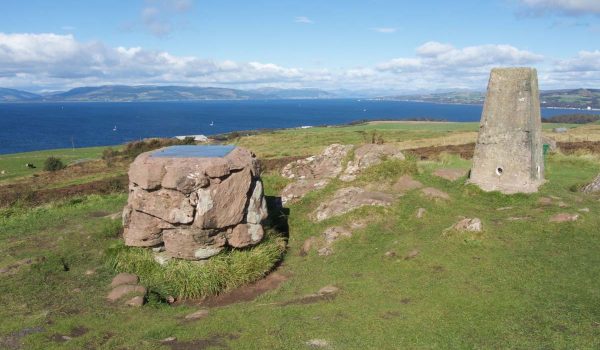 After having visited cities like Dunfermline and St Andrews along the east coast of Scotland it was time to move on to the opposite shore. For this reason I chose Ayrshire, a historic county overlooking the Firth of Clyde. It’s a region packed with history, culture, stunning landscapes and beautiful islands to explore.

Besides that, due to its very short distance from Glasgow, Ayrshire is a popular destination for day trips, either by car or public transport.

You can also visit most of the places mentioned below on this full day-tour from Glasgow (meeting point at Buchanan Bus Station).

The 4 places to visit in Ayrshire: the Isle of Cumbrae

Considered Scotland’s most accessible island, Great Cumbrae is a great day out in Glasgow. Indeed, it takes just one hour to reach it from Central Station and then a 10 minutes ferry trip from the coastal town of Largs.

Cumbrae is a paradise for walkers and bikers thanks to the different routes that offer spectacular views across the Firth of Clyde. The best panoramic spot is Glaid Stone, a large sandstone boulder that corresponds to the highest point on the island and located rightly in its centre. From there you can see the Arrochar Alps, Bute, Arran and the Renfrew Hills.

Millport is the only town on the island and it’s 4 miles (6 kilometres) south from the Caledonian MacBrayne ferry slipway. There you can find museums (interesting for kids as well), shops, restaurants, beaches and more than 1000 bikes available to hire.

Apart from that, remember to pay a visit to the amazing Cathedral of the Isles. Built in 1851, it’s the Europe’s smallest Cathedral as it hosts 80 people at the most. It’s open daily to visitors while the adjacent College offers accomodation for parish groups, retreats or simply for those who want to spend a quiet holiday.

While exploring Millport seafront you may spot the Crocodile Rock, a famous landmark that over the years has attracted so many children to get their photography. The story goes back to more than 100 years ago, when an inhabitant was wandering around the beach and saw a bare rock whose shape reminded him of a crocodile, so he decided to complete the work with a brush and paint.

Some useful links to plan the excursion:

The 4 places to visit in Ayrshire: Alloway

During the visit of Ayr I had time enough to explore some of its surroundings. A place not to be missed is definitely Alloway, and old village famous for being the birthplace of Robert Burns, the national poet of Scotland and also celebrated worldwide.

The Robert Burns Birthplace Museum tells us more about his life and what inspired his poems and songs. With a unique ticket it’s possible to visit all the sites in Alloway where he lived.

The tour can start from the Burns Cottage, where he was born on the 25th January 1759 and lived with his family and their farm animals. On the walls you can read some fragments of his verse and many examples of the Scots language.

Then, the pedestrian pathway Poet’s Path links the Cottage with the other sites. The Museum hosts more than 5.000 Burns artefacts also including his handwritten manuscripts as well as his most iconic works, like for example the world famous song Auld Lang Syne.

The Brig o’Doon and the Alloway Auld Kirk were both the setting for “Tam o’ Shanter”, one of Burns’s most popular works. The church was already ruined by Burns’ times and it’s the place where his father William and his sister Isabella are buried. The bridge dates back to 15th century and it’s so famous that it features on the £5 Scottish notes.

Las stop is at the Burns Monument, unfortunately closed when I was there due to maintenance work. The Grecian-style temple was designed by Sir Thomas Hamilton and finished in 1823. Then, to showcase Burns’ global fame you can see some a three dimensional model of the several monuments dedicated to him and located across the world.

You can get to Alloway from Ayr with a 30-40 minutes walk, otherwise you can catch bus services 58 and 361 operated by Stagecoach West Scotland. The Robert Burns Birthplace Museum is cared for by the National Trust for Scotland and tickets can be purchased online through this website.

The 4 places to visit in Ayrshire: Culzean Castle

Situated near Maybole and overlooking the Firth of Clyde, Culzean Castle is one of the most famous Scottish castles. It’s now owned by the National Trust for Scotland but it used to be the seat of the Kennedy family.

Designed by Robert Adam, the palace was built between 1777 and 1792. Once inside, you can explore it on your own or take part of the free guided tours daily available at 11 am and 2:30 pm. The highlight of the visit is definitely the emblematic Oval Staircase surrounded by Ionic and Corinthian columns and possibly haunted by a ghost. Also don’t miss the fine collection of paintings and furniture you can see in some areas like the Dining Room or the Round Drawing Room.

Culzean Castle has a strong connection with US. Indeed, in 1945 part of the castle was offered to General Eisenhower as a “thank you” from the Scottish people for what he did during World War II. He stayed in Culzean on 4 occasions, also when he was President. After his death in 1969 his apartment at the top of the building became the Eisenhower Hotel, one of the most exclusive places to stay throughout Scotland.

The castle lies within the Country Park which is an ideal destination for a family day out. It features a walled garden, a swan pond, a pagoda, play areas for children in the adventure cove and wild woodland, a deer park where it’s possible to admire one of Scotland’s most iconic animals, a Coffee House and a Gift Shop. The area also offers several paths across woodland and along the coastline. Then, you can take part of a guided tour to access to Culzean’s caves.

You can reach Culzean Castle by car or public transport. The bus service n. 60 coming from Ayr and Maybole stops in front of the entrance.

The 4 places to visit in Ayrshire: Dunure

The lovely village of Dunure is located just six miles south west of Ayr so it’s perfect for a short excursion. Indeed, I visited it together with Culzean Castle in the same day.

It’s considered one of the most interesting and beautiful villages of the Ayrshire coast and I couldn’t agree more with this statement. Dunure developed after the harbour was improved in 1811. Here there’s the Dunure Inn, reopened in 2006 and offering food and accomodation as well.

Within a short walking distance from the harbour stand the ruins of Dunure Castle. Built in 1200s, it was the main fortress of the Kennedy family, even more important than Culzean. In August 1563, Mary Queen of Scots stayed there for three days as the guest of Gilber Kennedy, 4th Earl of Cassilis.

Another local attraction is the Dunure labyrinth, realised and looked after by volunteers from the village and pagan groups from all Scotland. It’s situated atop a small stretch of beach in front of the castle and overlooking the Firth of Clyde.

Both sites are easily accessible leaving the car at Kennedy Park. Otherwise, bus n. 361 operated by Stagecoach East Scotland links Ayr to Dunure in around 20 minutes.

For all Outlander fans, Dunure appeared in Season 3 as the port where Claire and Jamie meet Jared and board the Artemis headed to Jamaica. The beach and the castles were used as well for the scene in which young Ian swim to Silkies’s Island.

These are my personal 4 places to visit on a trip across Ayrshire. Which are yours?