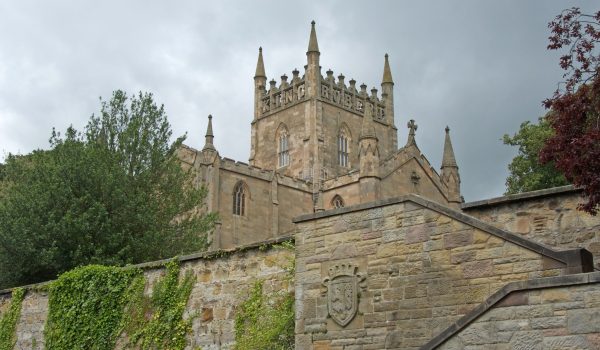 Dunfermline, what to see in one day in the Scotland’s ancient capital

During my last trip to Scotland I spent one week across Fife in order to discover some of the most important sites of interest of this region. The tour started off in Dunfermline, a charming town famous for being the old capital of Scotland.

What to see in Dunfermline in one day

The town is located in west Fife, around 5 km from the northern shore of the Firth of Forth. Due to its short distance from Edinburgh, Dunfermline is the ideal destination for a day trip. Besides that, the main attractions are all within a walking distance so you will have plenty of time for the visit.

My itinerary begins at the Andrew Carnegie Birthplace Museum, located exactly in the cottage where Andrew was born in 1835. The visit includes the room on the second floor where his family lived. The father was a weaver and you can still see a loom on the first floor. Unfortunately, the introduction of the steam engine and the crisis of the sector forced the family to emigrate to Pittsburgh, USA.

It’s here where Andrew Carnegie lived the “American Dream”. Thanks to several investments in steel industry he became the richest man in the world and one of the most generous philanthropists of all time.

Indeed, he gave away around 90% of his personal wealth supporting the founding of international landmarks like Carnegie Halls in New York, the Peace Palace in The Hague or the Mount Wilson Observatory in California. Besides that, he also funded around 2.800 public libraries worldwide and you can see the first one here in Dunfermline.

Apart from the Weaver’s Cottage dated back to 1700s, the bulding also features the Museum Hall built in the 1920s, a small Victorian garden, temporary exhibitions and a children’s area. And remember… admission is free.

The Dunfermline’s city centre is small but full of charm and historical sites. I suggest you to explore High Street, Bridge Street, Abbot Street and Maygate as well.

The starting point may be the Mercat Cross, dated back to 1626 but rebuilt and modified many times since then. It used to be the Dunfermline’s main meeting point for official proclamations before television and newspapers were introduced.

Walking along the High Street it’s easy to spot the Dunfermline City Chambers. It’s a beautiful building constructed between 1875-79 with a perfect mixture of French, Gothic and Scots baronial architectural styles and a prominent four-face clock tower.

Once in Maygate take a look at the stunning Abbot House, it’s the oldest secular building still standing in Dunfermline. Originally built in the 15th century, in the last years hosted a Café but unfortunately it’s closed since 2015.

Having said that, you can enjoy a beautiful view of the Abbey from the gardens property of the Carnegie Library and Galleries and located just behind the house.

The first public library opened by Carnegie was completely renovated in 2017, becoming a very popular visitor attraction. The venue includes a library, with also a section dedicated to children, a reading room, a museum about Dunfermline’s history, some galleries with temporary exhibitions, a café and gift shop as well as a panoramic terrace overlooking the local Heritage Quarter.

Andrew Carnegie donated Pittencrieff Park to the people of Dunfermline in 1903. It’s known locally as The Glen and it’s one of Scotland’s most important and popular urban parks.

It’s the place where I spent most of the time because there’re so many different areas to explore with also nice views of the Abbey and the Forth Bridges on the horizon. The core of the park is the Glen Pavilion, an amazing Art Deco style building that it’s used during the year for many several events.

Then, there’s Pittencrieff House, built in 1610 as a private residence. After Carnegie bought the area, it became a museum until its closure in May 2017 due to the opening of the Carnegie Library.

Throughout the park there’re a lot of walks to do that also give you the opportunity to enjoy some beautiful gardens, all refurbished in 2016. Other places not to be missed are the “Peace Pole”, celebrating the visit of the Dalai Lama in Dunfermline in 2004, the Andrews Carnegie Monument and, if there’re children with you, the three play areas.

The ruins of the Royal Palace and the Abbey remember to the visitors the glorious past of the town.

The Dunfermline Palace was built in the 13th century and originally it served as a guest house of the Abbey. Then it was the birthplace and residence of many Kings and Queens of Scotland. After the Reformation some additions and alterations were made and it became the personal residence of Queen Anna of Denmark, wife of King James VI. The last monarch to be born in Scotland was the future Charles I in 1600. Indeed, James and Anna left Dunfermline for London just three years later.

The Dunfermline Abbey is a “Royal Mausoleum” as it’s the burial site of Robert I, David I and Queen Margaret. She was the one who founded a priory in 1070 on the site where she had married Malcolm III. Then, in 1128 David I made the priory an abbey. Today, you can still see the original abbey’s great nave, considered the most stunning example of Romanesque architecture in Scotland. The eastern part was rebuilt between 1818-1821 for the new Abbey Parish Chuch and it’s also the location of the tomb of King Robert I The Bruce.

Before leaving, take a look at the cemetery around the Abbey. According to a legend, William Wallace’s mother should be buried here. Please note that both the Palace and the Abbey are property of Historic Scotland so admission is free for Historic Scotland Explorer Pass holders.

Dunfermline Abbey is also one of the main stops of the day-tour from Edinburgh which also includes a visit of St Andrews and Dundee. To find out more about this activity available through the year and to book it in advance please check this website.

Other places of interest

A few steps away from High Street there’re other attractions that deserve a visit. For example, the Carnegie Hall is an Art Deco Theatre and very popular venue for drama, music, dance, comedy as well as children’s shows. Just around the corner, the Music Institute and the Studio Theatre support local arts organisations.

Another famous venue for live music, dance and comedy is the Alhambra Theatre. It’s open since 1922 and until mid 60s it was known mainly as a cinema.

The last stop of the itinerary is at Saint Margaret’s Cave. Located in Glen Bridge Car Park, it’s the place where Queen Margaret went to pray over 900 years ago. To reach the cave you have to walk along the tunnel with 87 steps leading deep underground.

Margaret was a Saxon Princess and became Queen of Scotland when she married King Malcolm in Dunfermline. In honour of her life, for the role she had in the renewal of the Church in Scotland and for all the miracles associated with her after the death, Pope Innocent IV made her a Saint in 1250.

Today, this is the only place in UK directly linked to the Saint. Indeed, if you visit Edinburgh Castle you can see the Chapel dedicated to her but it was built after her death in 1093.

Where to sleep in Dunfermline

The city can be a perfect base to explore the area. I stayed at The City Hotel, originally built in 1775 in one of the oldest buildings on the main street.

The hotel is located in the center of the town, the attractions and the bus station are within a walking distance. The 32 bedrooms are all en-suite and feature complimentary tea and coffee making facilities as well as free WiFi. The rates also include a full cooked Scottis breakfast served in the bar-restaurant on the ground floor.

How to reach Dunfermline from Edinburgh (Airport)

As I wrote in the first paragraph, Dunfermline is the ideal destination for a day out when in Edinburgh. It’s very easy to get there by public transport as you can travel by train or bus.

From Edinburgh City just take Stagecoach bus service X55 – journey time is aprox. 60’ – or the train from Waverley Station, around 45’.

Otherwise – and that was my case – you can reach Dunfermline from Edinburgh Airport by Stagecoach’s JET747, the bus connecting Edinburgh to Fife 7 days a week, 24 hours a day. Please note that not all the services are direct and you may have to change at Ferrytoll Park & Ride or Halbeath Park & Ride.

For more information about Dunfermline: https://www.visitdunfermline.com/ .