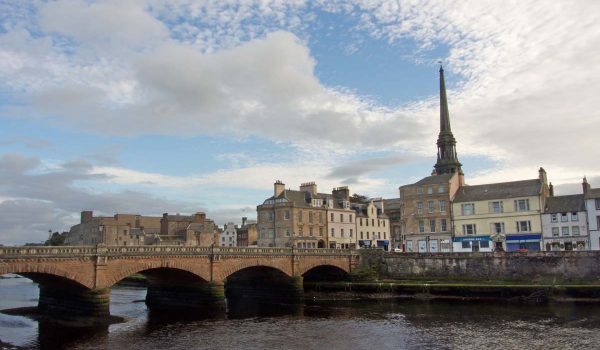 Visit Ayr in Scotland, the things to do and see in the historic county town of Ayrshire

During my trip to Ayrshire I stayed in Ayr, an old Royal Burgh and today a large town located on the west coast of the region. Apart from being an ideal base for exploring the area, Ayr is packed with historical and cultural landmarks as well as beautiful landscapes to enjoy.

In this article I take you with me to discover this lovely town with a walking itinerary across Ayr City Centre. Then, I’ve also attached for you some useful information about accomodation and how to get there. In case you’re interested in exploring more this region, this guided tour from Glasgow could be a great opportunity to discover some of the local places of interest.

What to see in Ayr in 24 hours

Situated on the Firth of Clyde and well connected to Glasgow, Ayr is very popular destination, especially among day visitors. Indeed, a full day in town allows to see the main places of interest, all located within a walking distance from the bus and railway stations.

It overlooks the mouth of River Ayr and this is crossed by two bridges, the old and the new ones.

The Auld Brig of Ayr was already mentioned in a document from 1236 and, according to a local legend, it was founded by two maiden sisters, one of whom had seen her lover drown while fording the river.

Centuries later, when it became too old to sustain the traffic of carts and sledges, a new bridge was absolutely necessary. Designed by Robert Adams, it was opened in 1788 while the old one was converted in a pedestrian crossing as it appears today.

Both buildings are mentioned in an episode of Robert Burns‘s poem, “The Brigs o’ Ayr”. Indeed, there’s an argument between the two bridges during which the old one predicts that it’ll stand long after the new bridge has collapsed. As a matter of fact, in 1789 it had to be demolished due to a sever storm and then rebuilt.

The Auld Kirk of Ayr and its cementery stand not far from the Auld Brig. It was built in 1654 as the Cromwell’s army requisitioned the local church. Robert Burns was baptised here. If you’re interested in visiting it just check the official website for the opening times throughout the year.

High Street, Newmarket St and Sandgate are the main streets of Ayr’s town centre and there you can find many stores, a new shopping centre, restaurants and pubs. Besides that, there’s also a couple of interesting buildings that tell us more about the history of the town and Scotland as well.

Walking across the High Street you see the William Wallace Tower, built in honour of the Scottish hero born in Ayrshire. The gothic monument dates back to 1832 when it replaced the original construction.

Then, near the tower there’s the Tam O’Shanter Inn, one of the last thatched buildings still standing in Ayr. It opened in 1749 and it became famous for being mentioned in Burn’s poem “Tam O’Shanter”.

In Boat Vennel, situated almost on the opposite site of High St stands the Loudoun Hall. The build dates back to the late 1400’s and for this reason it’s one of the oldest building in Ayr. It’s said that in 1563 Mary Queen of Scots spent here a couple of nights. Today it hosts different local societies such as Ayr Photographic Society or Ayrshire Philatelic Society.

Walking to Ayr Harbour you pass near the walls of the military fort commissioned by Oliver Cromwell in 1652 to control the area. Anyway, after his death in 1660 the monarchy was restored so the Cromwellian Citadel was demilitarised.

A few steps away from the military fort, the St John’s Tower is what remains of the original Church of Ayr built around 1300. Here, on the 26th April 1315 after the battle of Bannockburn, the Scottish Parliament met to confirm the succession of the Scots Crown to King Robert The Bruce.

Have a stroll along Ayr beach

The town is well known for its fantastic promenade with a long sandy beach where people reunite for a walk. Part of the seafront is popular called the Lang Scots Mile, the misure traditionally adopted in Scotland before the standard English Mile was introduced. The Lang Scots Mile was also mentioned by Robert Burns in his famous poem “Tam O’Shanter”. The area has been renamed in that way also because it’s located near Burn’s birthplace in Alloway.

This is one of my personal highlights of the trip across Ayrshire as well as one of the main stops during this full day-tour from Glasgow.

I also had the chance to explore a section of the Ayrshire Coastal Path, a route that runs along the coastline for 22 miles offering stunning views across the Firth of Clyde and the Isles of Arran and Bute. My itinerary started next to Greenan Castle, a fortress from the XVII° century overlooking the Firth. It’s situated around 3 miles (4,5 Km) south the town centre.

Then I crossed the bridge over the River Doon to get to Ayr’s Seafront. Apart from the panoramic sights, local places of interest are the park Low Green and the Ayr Pavilion, opened in 1911 to host many summer variety shows.

The first one is Belleisle Park, which is home to two 18-hole public golf courses and a golf clubhouse as well. The area also offers woodland walks, a walled garden, two children’s play areas and the Belleisle Conservatory.

Pay a visit inside where you can observe many species of plants like tropica, alpine, orchids, carnivorous and cacti. In addition to that it’s possible to see the bees work in the inner hive. Admission is free but any donation to support the conservatory is very welcome. Opening times are 10-16 from April to September and 10-15 from October to March.

Opposite to Belleisle there’s Rozelle Park, an estate opened to the public since 1968. The property is used for cultural and recreational pursuits. For example, inside Rozelle House you can visit the Maclaurin Galleries. Opened in June 1976, the galleries feature drawings, sculptures, paintings and prints mainly related to the modern period, 1900-1990. Usually the artworks are bought from artists and art dealers or acquired by commission.

Where to stay in Ayr

My choice was the Lochinver Guest House, a lovely Victorian house ideally located near the town centre, the beach, the railway station, the bus stop towards Alloway and Culzean Castle.

The Guest House combines the Victorian style with all the modern comforts. Even for this reason my stay was just perfect. The seven bedrooms are named after clans associated with Ayrshire. For example, mine was the Cunningham, the lairds of the region to the north of Ayr.

Every room has its own design and en-suite or private facilities.

The breakfast was simply sumptuous, including a buffet with fresh fruit salad, yoghurt, a selection of fruit juices and cereals together with porridge, the full Scottish breakfast, eggs Benedict and other delicious meals to order from the menu.

How to get to Ayr from Glasgow

The easiest way is definitely by train. Indeed, Scotrail operates daily services from Glasgow Central Station to Ayr. Journey time is about 40-60 minutes and the trains also stop at Glasgow Prestwick Airport.

Otherwise, Stagecoach buses connect Ayr to Glasgow and other destinations throughout Ayrshire.

The railway/bus stations are centrally located within a walking distance of the beach and the other local attractions.