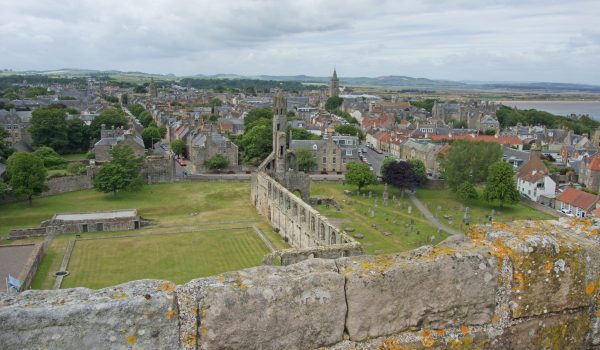 St Andrews, a day trip from Edinburgh to visit the “home of golf” and the oldest university in Scotland

During my last trip to Fife, after having visited Dunfermline and Falkland I decided to spend a day in St Andrews, one of the most popular tourist destinations throughout Scotland. So there’re many day or multi-day tours from Edinburgh stopping here as well as local walking tours available for all visitors.

You find the full list of activities at this link.

It’s located on the east coast of Fife, 30 miles northeast of the Scottish capital. Worldwide famous as the home of golf, it’s also home to the University of St Andrews, one of the most famous in all United Kingdom.

St Andrews is a very compact town and easy to visit. As a matter of fact, the centre includes three main streets and the tourist attractions are situated there or just along the coast, between the two sandy beaches.

For this reason, the town it’s a perfect place for a day excursion from Edinburgh by public transport or car.

The Old Course, the West Sands and the University of St Andrews

Golf is part of St Andrews’ history since at least 1552, when playing it on the links adjacent to the North Sea was granted permission by Archbishop Hamilton. Anyway, it’s likely that golf had been played long before 1552, as the sport was forbidden in Scotland by King James II in 1457.

Dated back to medieval times, the Old Course is the most famous golf course in St Andrews and it was purchased by town council in 1894. Playing and possibly win here it’s the ambition of many golfers. The best thing of this and all the other courses of the area it’s that they’re public, open to all. But please note that to play at the Old Course it’s required to book in advance, like months ahead.

While there, if you’re interested in the history of golf from Medieval time to now, take your time to visit the renovated British Golf Museum, situated opposite the clubhouse of the Royal and Ancient Golf Club.

Before heading back to the town centre, have a walk along the West Sands to enjoy its natural beauty and the views of the coastline. The beach is also famous as appeared in the opening scenes of the film Chariots of Fire. It’s about a 15-20 minutes walk from St Andrews’ main attractions with plenty of car parking.

On the way to the centre, near the St Andrews Aquarium you can see the Martyrs’ Monument.

Overlooking the Sea and the Old Course as well, it was erected in 1842 to remember the Protestant reformers executed around 300 years earlier during the Scottish Reformation.

Walking along The Scores there’s the MUSA, the Museum of the University of St Andrews. It features a huge collection of 112.000 objects that tell us about the 600-year history of the University as well as the contributions to arts and science.

Among the many buildings property of the University I had a glimpse of the St Salvator’s College. It’s the oldest of the University’s College as it was founded in 1450 then it merged with St Leonard’s College in 1747 to form United College.

Today it hosts several lecture theatres, the departments of Russian, Spanish, social anthropology and it’s also the finish point of the post-Graduation processions.

While there, take a look at the St Salvator’s Chapel, founded in 1450 and a beautiful example of late gothic architecture. The chapel is open to all those who want to attend the services and prayer meetings. It’s also available for wedding ceremonies.

Built on the edges of a rocky promontory overlooking the North Sea, St Andrews Castle dates back to 1189-1202. Over the centuries it’s been used as the official residence of Scotland’s leading bishop and archbishop.

Then, as for many buildings in Scotland, it was damaged and rebuilt several times, for example following the War of Independence with England between 1296 and 1357. Then it came the Scottish Reformation and the castle was again under attack. The great siege of 1546–1547 caused new damages to the palace so Archbishop John Hamilton repaired it. Unfortunately for him, as opponent of the Reformation he was eventually hanged.

After bishops were abolished in 1592, St Andrews Castle remained uninhabited so it fell rapidly into ruin.

During the visit you can appreciate the “Sea Tower”, one of the most important areas of the fortress as it was used as a prison for all the persons in disagreement with the political-religious thoughts of the bishop.

Walking across the ruins you can also enjoy stunning views of the coastline and the Cathedral on the horizon.

The St Andrews Cathedral is definitely a “must-see”, a symbol of the town. The remains of Scotland’s most magnificent medieval church look amazing and we can only imagine the awe of all the pilgrims that came here by foot in 11-12th centuries. Indeed, the site was used for worship since at least the 700s when, according to a legend, St Andrew’s relics were brought here.

The Cathedral was begun around 1160 and it was consecrated in 1318 with the presence of Robert The Bruce. Unfortunately, it was destroyed in 1559 by the followers of John Knox and the stones were used to build the houses of the town. Just the 33m tall St Rule’s Tower survived but it was left to fall into ruins. Today it’s possible to climb to the top of it from where you have beautiful views across St Andrews and Fife.

Both St Andrews Castle and St Andrews Cathedral are managed by Historic Scotland so the access is free for Explorer Pass holders. You can buy the tourist pass in advance here.

The three main streets – North Street, Market Street and South Street – are plenty of pubs, restaurants and bars where to go. I went to Tailend, a family run business specialised in fish but also offering burgers, chickens and salads. All the products are Scottish and sourced locally. My choice was the fish & chips, simply yummy!

After having discovered some beautiful sights across the town centre, the walk finishes in South Street. Here you can find the remains of the Blackfriars Chapel. Built by the Friars in 1520 as part of their monastery, it was one of the first buildings in St Andrews to be ruined during the Scottish Reformation. And for those who are passionate about paranormal activities, it’s said that the place is haunted by the ghost of Prior Alexander Campbell…

To find out more the supernatural in St Andrews I recommend you to take part in ghost walking tours available all year round. For all details and online bookings please check this website.

On the same street there’s the West Port, one of the last examples of a medieval city gate in Scotland. It dates back to 1589 and then it was renovated in 1843. Today it welcomes all the visitors headed to the town centre.

How to reach St Andrews (from Edinburgh)

As I wrote in the first paragraph, St Andrews is perfect for a day trip from Edinburgh. Don’t matter if you prefer not travelling by car, the town is easily reachable by public transport.

By train, you have to get off at Leuchars, just ten minutes by road from St Andrews and linked to the town by taxis and public bus services.

Otherwise, if you travel by bus the station is located 5-10 minutes away from the centre. The’re frequent connections to and from Edinburgh, Glasgow and Dundee as well. Besides that, Stagecoach East Scotland also operates through the wider Fife area.