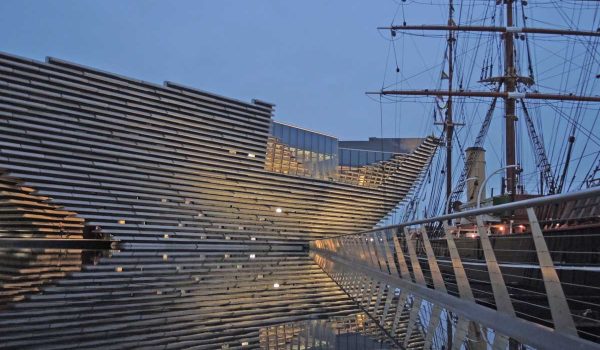 Dundee, what to see in the UNESCO City of Design on the east coast of Scotland

Considered as Scotland’s sunniest city, Dundee lays out along the Firth of Tay and it’s not far from Perth. It’s also halway between Edinburgh and Aberdeen and you can reach it by bus or by train from many stations throughout UK.

Dundee is known as the “city of jute, jam and journalism” due to its relevance in these sectors during the 19th century as a consequence of the Industrial Revolution. Today the city is a very popular hub for innovation and creativity and for its contribution to many fields like medical research, video games and comics it was recognised as UNESCO City of Design in 2014, the first in all United Kingdom.

What to do and see in Dundee in two days

The main reason that brought me here was to visit the new V&A Dundee, the world’s only museum outside of London. Anyway, I had the chance to plan an itinerary that allowed to explore different areas of the city to find out more about its history and cultural heritage.

Dundee is not very big so it’s quite easy to get to most places on foot. Otherwise, you can use the local bus services operated by Xplore Dundee to move around including Broughty Ferry as well.

The Law, the city centre and the McManus Art Gallery and Museum

The tour starts from Dundee West End where the University Campus is settled. Every year more than 17.000 students come here from all over the world, making Dundee Scotland’s most student-friendly city. The University has a very strong reputation in sectors such as biosciences research, art and design, medicine and dentistry, engineering and humanities.

Situated in the surrounds of the city centre and along the braes of the Law, Dudhope Park and Castle is a local beauty that deserves a look. It was used as a military base until 1881, today it hosts offices of the Dundee City Council and unfortunately it’s not possible to visit inside. The park around is perfect for a relaxing walk and also features a play area, tennis courts and a skateboarding park.

From Dudhope just follow the path to Dundee Law, a wonderful viewpoint over the city, the Firth of Tay and Fife’s coastline on the other side. The hill is 174 m high and at the top of it there’s a war memorial built in 1925 for all the people who passed away in both World Wars.

The Law is an authentic distinctive landmark and also very important for learning more about the origin and development of the city. Indeed, many archaeological evidences tell that the area was inhabited since 3.500 years ago, by the Picts and then by the Romans too. Later on, on 13th April 1689 Viscount Dundee raised the Stuart Royal Standard here to mark the beginning of the first Jacobite Rising.

After this panoramic sight it’s time to return to the city centre. The first stop is in the City Square, the main square where there’re the Town Hall and the Caird Hall. This bulding dates back to early 20th century and it’s an important venue for concerts and other kind of events like graduation ceremonies from the local University.

Opposite to the square, the Desperate Dan Statue is a symbol of Dundee as it’s one of the characters of the British comic book “The Dandy”, issued by the local publishing company DC Thomson between 1937 and 2013. Beside Dan there’s a sculpture representing Minnie the Minx, another popular character from the comic “The Beano”, always published by DC Thomson.

If you love street food (I do love it too!) just walk on High Street and then on the pedestrian Commercial Street until you reach The Auld Tram. This is one of the oldest examples of the original Dundee Horse Drawn Tram still existing nowadays. It operated in the late 19th century before electric trams were introduced.

Most of the afternoon is spent for the visit of the McManus Art Gallery and Museum, opened in 1869 in a magnificent Victorian building designed by the architect George Gilbert Scott.

In this unique space you can find history, art, culture and nature, giving you an insight into Dundee and what happened in the area in the last 400 million years. Films, sounds and games make this place enjoyable for children too.

Throughout the 8 galleries there’re some fascinating items and paintings you shouldn’t miss. For example, the oldest astrolabe in the world used by sailors to calculate the angle of the sun or a star on the horizon. One of the largest objects showcased at McManus is the skeleton of a whale caught in the River Tay at the end of the 19th century. It’s symbol of Dundee’s whaling past and its relevance for the economy of the city. Then, you can see one of only two Jacobite flags survived after the battle of Culloden in 1746. This belonged to the Angus regiment under Lord Ogilvy. All the other flags were confiscated by Hanoverian forces and carried to Edinburgh to be burned.

Inside there’re also a retail area and a cafe. The McManus Art Gallery and Museum is open all year round, 10am-5pm from Monday to Saturday and 12:30am-4:30pm on Sundays. Entrance is free.

The Waterfront, the V&A Dundee and the RRS Discovery

The following day is focused on Dundee’s Waterfront along the Firth of Tay. The area is at the heart of investments to redevelop it and transform the city in a world leading destination for both businesses and tourists.

The first visible results are the renovated Rail Station, with platforms located below sea level, and Sleeperz Hotel opened in July 2018. Having said that, the turning point was the new V&A Dundee, the Scotland’s first design museum and the only other V&A museum opened in the world outside London.

The building was designed by the Japanese architect Kengo Kuma, who is designing the stadium for the Tokyo 2020 Olympics too. His aim was to create a space enjoyable for everyone, where people can meet up and spend some time together exploring the new Waterfront. The structure consists of curving concrete walls that hold 2.500 pre-cast rough stone panels recreating the shape of a Scottish cliff face. Speaking of environmental impact, the museum takes advantage of geothermal energy to heat and cool the building.

Once inside, through the galleries and exhibitions it’s possible to discover Scotland’s design heritage and how designers influenced the daily life in the past. In the Scottish Design Galleries you can see the Mackintosh’s Oak Room, the largest tearoom interior designed by him. He created this masterpiece in 1907-1908 for Mrs Cranston’s Glasgow tearoom and it remained in use until 1971. Then, it was dismantled after the tearoom closed. Finally it has been restored – the process lasted many years – and now it’s beautifully displayed here.

Admission to V&A Dundee is free, apart from some temporary exhibitions. The museum is opened 10am to 5pm all year round except 25-26 December.

Just aside the museum stands the RRS Discovery, one of my personal highlights of Dundee. The ship was built here in 1900 and then launched the following year. Few months later it departed for the British National Antarctic Expedition (1901-1904), the first official one to this largely untouched continent in order to carry out scientific research and geographical exploration.

Visiting the Discovery Point – including the museum and a tour aboard – allows you to experience what life was like in the Antarctic and learn more about Captain Scott and his brave crew.

The award-winning attraction is open throughout the year, except 25-26 December and 1 January:

The RRS Discovery is one of the highlights of the day tour from Edinburgh departing all year round which also includes stops in Dunfermline and St Andrews. Full itinerary, prices and online bookings are available at this link.

There’re different ticket prices as they can also include the Verdant Works, a refurbished jute mill located near Dudhope Park where you can find out more about Dundee’s industrial textile heritage.

The tour of the Dundee Waterfront continues with a walk that goes along the Firth of Tay and passes by the Tay Road Bridge, opened in 1966 and one of the longest road bridges in Europe. In the City Quay, where modern docks were built during the 19th century, the HMS Frigate Unicorn is one of the 6 oldest ships in the world and this makes it a top tourist attraction in town.

Unfortunately I didn’t have the time to step aboard so I definitely have to return to visit this glorious ship.

While you’re wandering across Dundee city centre you may notice some amazing painted doors along the streets, especially in its unexplored crannies and nooks. Indeed, the aim of this project is to bring street art in places where normally people don’t go. In this way the urban environment is improved so that vandalism is discouraged.

For more information about the two street art trails and guides tours to see all the 38 masterpieces scattered across the city: openclosedundee.co.uk/.

Where to stay in Dundee

In collaboration with DAVAA – Dundee & Angus Visitor Accomodation Association – I had the chance to stay at Alberta Guest House. It’s located in a tranquill residential area close to the city centre and well connected to it by bus (services 32-33 operated by Xplore Dundee).

The house was built in 1902 and named after Princess Louise Caroline Alberta, the sixth child of Queen Victoria. As wife of the Duke of Argyll she had to travel to Ottawa when he became Givernor General of Canada. During her stay, she was appreciated by local people for her deep interest in arts and support of Suffragette Movement. That’s the reason why areas like the province of Alberta and Lake Louise are named after her.

Margaret and Ariel are the owners of Alberta Guest House since September 2015. Many works have been done to renovate the building in order to offer you a comfortable and welcoming place where to stay.

There’re four rooms available, all en suite apart from the single one that features a bathroom and shower room down the hall. Every bedroom is centrally heated and includes a hospitality tray, TV and free fiber optic WiFi.

Breakfast is served as a buffet with meats, cheeses, pastries, fruits and berries, cereals and breads.

For enquiries and bookings please visit the official website.