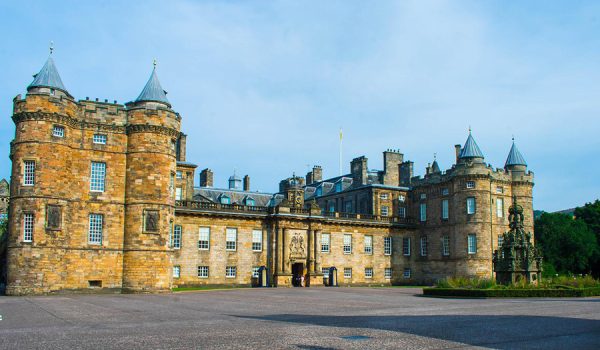 Holyrood Palace, what to see in the King’s official residence in Edinburgh and information for your visit

The Palace of Holyroodhouse is one of the most important historical sites in Edinburgh, located at the bottom of Royal Mile in the heart of the Old Town which is a UNESCO World Heritage Site since 1995.

The building served as the home of the Scottish monarchs from the 16th century up to Mary Queen of Scots. Today is the official residence of the British monarch in Scotland and usually the King spends some days here in early July.

Where is Holyrood Palace and how to get there

The Royal Palace is located in Canongate, the lower street forming the main Royal Mile which links Edinburgh Castle to Holyrood Palace.

On the other side of the road you can see the new Scottish Parliament building, designed by the Spanish architect Enric Miralles and inaugurated by Queen Elizabeth II on 9 October 2004.

The post-modern architectural style has been criticised by politicians and inhabitants as it is in clear contrast with the buildings around it. Interiors are definitely better and you can visit them for free.

To better appreciate the whole Scottish Parliament architecture I recommend you to walk up to the top of Arthur’s Seat in the nearby Holyrood Park.

Holyrood Palace is within a walking distance from other Edinburgh’s main attractions, otherwise you can reach it traveling with Hop-on Hop-off tourist buses:

What to see inside Holyrood Palace

The King’s official residence in Edinburgh has a long history full of important events. The itinerary of the visit includes different places and it lasts around 2 hours.

The ruined Augustinian abbey was founded by King David I in 1128 and it hosted coronation ceremonies, royal weddings and funerals.

The rooftop collapsed during the 18th century but it was never repaired, leaving the abbey as we seen it today.

The first structure dates back to the 15th century and it served as a guesthouse for the Scottish kings before a new Gothic building was erected between 1501 and 1505 by James IV. His successor, James V, added other spaces including the rooms later used by Mary Queen of Scots during her stay between 1561-1567.

She was certainly one of the most famous monarchs to live at Holyrood Palace. Don’t miss the Suppper Room, where on 9 March 1566 her private secretary, David Rizzio, was killed by her husband, Lord Darnley, with the help of a group of Scottish Protestant nobles.

Rizzio was stabbed 56 times and it is said that some bloodstains from his body are still visibile on the floor of the Outer Chamber where he was left after the murderer. Have a look to see if you can find them…

Holyrood ceased to be the permanent seat of the Royal court when James became King of England in 1603 and moved to London. Then, the palace lost its principal functions following the Union of Scotland and England in 1707.

However, during the Jacobite Rising in 1745 the palace was again “Royal” as Bonnie Prince Charlie held here the court for five weeks.

The Great Gallery was the seat of official meetings during the day while at night it was used for parties; the Ante-Chamber was where the Prince dined in public with lots of supporters looking at him.

Then, whilst exploring the State Apartments you can see the rooms used by Queen Charles III and the Royal Family to dine as well as for private meetings during their stay in Edinburgh.

This is the art gallery opened by Queen Elizabeth II in 2002 and located in a Victorian building few steps away from Holyrood Palace. Visitors can admire annual changing exhibitions with old master paintings, rare furniture, decorative arts and images from the Royal Collection.

Despite being part of Holyrood Palace complex, entrance tickets for Queen’s Gallery must be purchased separately.

The palace is open to public, except during the Royal Week in July when the King lives in the Royal Residence.

Holyrood Palace closes on Tuesdays-Wednesday but in July and August it is open 7 days a week.

Visitors have access to the Royal Palace, Holyrood Abbey and the Royal Garden as well. The audio guide in English and other 9 languages is also included.

Entrance Tickets to Holyrood Palace can be booked here.

Holyrood Palace, together with Edinburgh Castle and the Royal Yacht Britannia, is included in the Royal Edinburgh Pass. This ticket is valid 48 hours and it allows tourists unlimited travels on the 3 different Hop-on Hop-off City Sightseeing Buses.

All information and online booking are available in this website.

As I wrote before, access to Queen’s Gallery is not included with the Holyrood Palace ticket.

Opening times and closing days are the same as for Holyrood Palace.

Entrance tickets to Queen’s Gallery can be booked here.