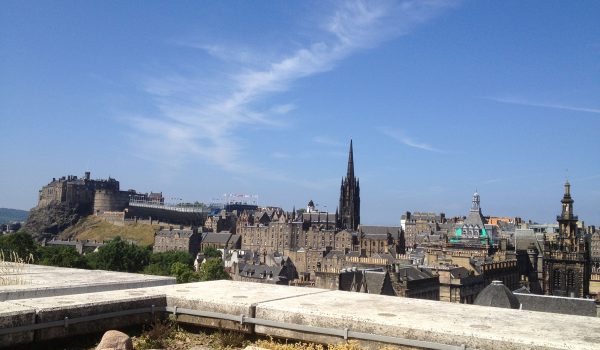 There are plenty of things to do in Edinburgh, for example several walking tours in the city center, mainly in the Old Town. The one I suggest here it’s a special one, it’s something that I tried by myself while I was looking for something alternative to see. I’m speaking about the best panoramic views in Edinburgh, the places where to enjoy its beauty at most.

Edinburgh is built on 7 hills, some of which are of volcanic origin. That means there are many natural panoramic viewpoints and most of them are located in the city center. So you can reach them just by walk even though autobus it’s always a good option to keep in mind.

The roof terrace at National Museum of Scotland

The National Museum of Scotland is the most important museum in Edinburgh as well as in Scotland. It’s located just ten minute walk from the Royal Mile. It’s definitely the right place if you are keen on several topics like art, design, fashion, natural and animal world, culture, science and technology, archeology and history of Scotland. Despite their age, children will appreciate this place as there are several designated area where they can learn by playing. Admission is free so it allows you to get in and out whenever you want.

Anyway, before leaving make sure to pay a visit to the roof terrace at the 7th floor. This is a beautiful panoramic viewpoint overlooking the Edinburgh Castle and all the buildings along the Royal Mile.

In the heart of the Scottish capital, Edinburgh Castle rises up on Castle Rock. Formed about 350 million years ago, it’s 130 m high so it’s perfect to take a look at both “sides” of the city: the Old Town on the right (Grassmarket, National Museum of Scotland, Holyrood Park) and the New Town on the left (Princes Street Gardens, Scott Monument, Calton Hill, Leith).

If you come to Edinburgh during summertime unfortunately this viewpoint is not available as the bleachers occupy the esplanade for the Military Tattoo that takes place in August.

Don’t worry, if you’re visiting Edinburgh Castle (you can buy the tickets here

to avoid the queue once there) then you will love the stunning view of the city that you have just walking along the defensive walls.

Grassmarket and the Flodden Wall

Due to the incredible amount of pubs and restaurants crowded by students and tourists, Grassmarket is one the most lively squares in Edinburgh Old Town.

Apart from that, in its surroundings it’s possible to admire the remaining fragments of the Flodden Wall. It was built in the early sixteenth century to defend Edinburgh from the English army. To see the wall just cross the square and go up to The Vennel.

Once you have climbed the staircase will you get a buzz from this unique view of the old wall together with the Edinburgh Castle on the horizon.

Holyrood Park is the Royal Park situated at the end of Royal Mile, the famous Street that links Edinburgh Castle with Holyrood Palace. Once in town I’m used to spending a lot of time wandering across the Park looking for some tranquillity. Apart from that, there are two places that deserve a visit for their beauty as well as the panoramas they offer.

I’m talking about the Salisbury Crags, a series of cliffs formed from steep dolerite and columnar basalt, and Arthur’s Seat, the highest point (251 metres) that overlooks the city.

During your stay in Edinburgh you can’t definitely miss these places… especially at sunset!

Another volcanic hill is Calton Hill, located in the New Town and one of the most visited places of Edinburgh. Included in the city’s Unesco World Heritage Site, the hill hosts several iconic monuments like the Nelson Monument, the National Monument (it remembers the Parthenon in Athens but it’s unfinished because of lack of funds), the Robert Burns Monument and the City Observatory.

Anyway, the most famous spot where photographers and tourists “meet up” is near the Dugald Stewart Monument. As a matter of fact, this is considered the best panoramic viewpoint of Edinburgh. From here you can see the city and all its main attractions like the Edinburgh Castle overlooking the Royal Mile and the rest of the Old Town. On the other side of Waverley Bridge there are the Princes Street Gardens and the Scott Monument, that’s the New Town that goes up to Leith, the port of Edinburgh on the shores of the Firth of Forth.

At the top of Calton Hill, like in Holyrood Park, sunset is the most suggestive moment for appreciating the view in front of you.

You can believe it just noticing the incredible number of people that reach the hill trying to get the best panorama of Edinburgh!

The car park at Ocean Terminal in Leith

Yes, I know.. I’m talking about a car park. But trust me, it’s worthwhile. It’s part of the Ocean Terminal, a new shopping center in Leith where you have to go if you want to visit the Royal Yacht Britannia (you can buy the tickets here

Thanks to Daniele, an italian friend who lives in Edinburgh, I discovered that car park that was revealed to be quite special. As a matter of fact, the last floor (uncovered) it’s like a panoramic terrace over Edinburgh city center as well as the Firth of Forth and the Fife coastline on the opposite side.

When I say Edinburgh never ceases to amaze me, well… this is a good example! 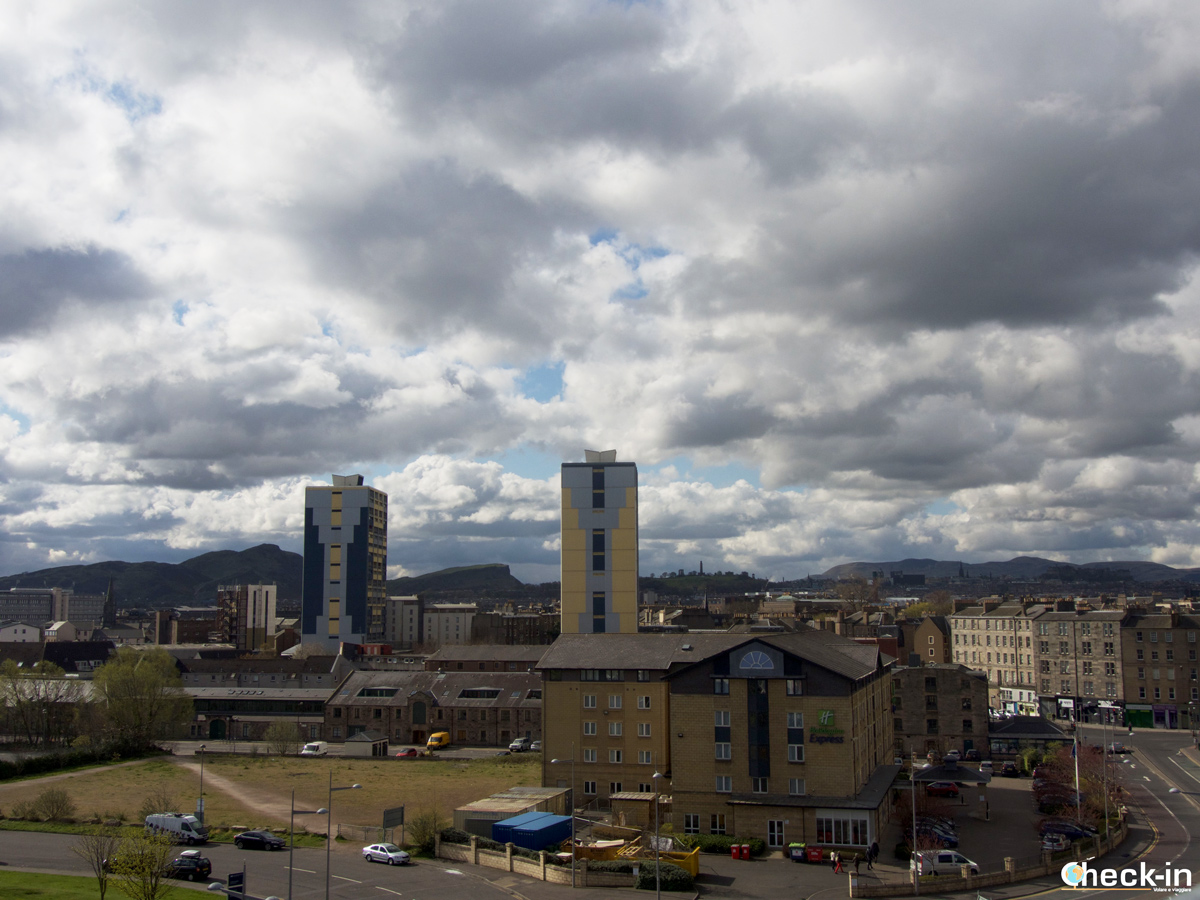 Blackford Hill and the Hermitage of Braid

Now we cross again the city, on the opposite side of Leith up to the southern part of the Old Town. We are headed to Blackford Hill, one of the seven hills of the Scottish capital. Located in the heart of a quiet residential area, you can get there by foot passing through the park “The Meadows“ and then proceeding straight ahead. The walk is quite long but relaxing: it took me more or less an hour. Alternatively, there are buses that connect the district with the city center, for example, n. 3-7-8-24-29-41-42-67.

The area around Blackford Hill is called Hermitage of Braid and it’s a nature reserve that includes a loch and the Royal Observatory. Climbing the hill it’s very easy and once you are on the top of it get ready to admire Edinburgh in all its beauty. Despite the distance, Edinburgh Castle is still visible and it’s possible to follow the skyline of the city center recognizing the main attractions: the palaces of the Royal Mile, Calton Hill, Salisbury Crags, Arthur‘s Seat and Leith in the background.

I love Blackford Hill (though the strong wind) because I can really look at the whole city and clearly distinguish the most important places. Compared to Arthur’s Seat, there are less tourists arriving here due to the location that’s not really in the center. I’d say this is a good thing as permits to enjoy (almost) completely alone the breath-taking panorama.

Far from being finished, this is the list with my best panoramic viewpoints in Edinburgh. If you know other ones, please leave a comment 🙂