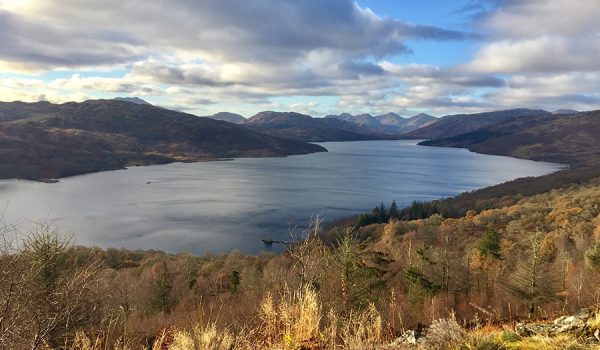 Loch Katrine, what to do and see in one of the most beautiful places to visit in Scotland

The Loch Lomond and The Trossachs National Park lies in the heart of Scotland, at the “border” between Lowlands and Highlands. It was the first of the two national parks established by the Scottish Parliament in 2002. It consists of many mountains and lochs so it’s the ideal destination for those who are keen on trekking, wild life and amazing sceneries.

Loch Katrine is one the top locations of the park – apart from Loch Lomond, which is the largest lake in Great Britain – as it’s a scenic attraction in the Trossachs area. It’s a very popular day out for tourists and visitors coming from Glasgow, Stirling and nearby towns. Besides that, this is the right place even if you want to stay longer. Indeed, you can relax and let Loch Katrine be your home for the night. Many spaces for motor homes and tents as well as the new Eco Lodges are available on site.

Visit Loch Katrine: cruises, walks, Outlander, accomodation, food and how to get there

The area is steeped in history and literature as people like Sir Walter Scott, Rob Roy MacGregor and Queen Victoria are linked to Loch Katrine. The Scottish novelist came here in 1810 and the beauty of the loch inspired him to write his famed poem “Lady of the Lake”. Queen Victoria visited the area in 1859 to open the Loch Katrine Water Project. Since then, the loch has served as the main fresh water supply for the city of Glasgow.

There’re 2 vessels available for a Loch Katrine cruise throughout the year so that you can enjoy amazing landscapes which change from season to season.

The famous steamship Sir Walter Scott is one of Scotland’s major visitor attractions. Launched in 1899, it still ferries passengers across the loch during the summer departing from Trossachs Pier. It was coal-fired until 2007, then it was converted to use bio-diesel fuel in order to preserve the water source and the environment. The steamship welcomes cyclists, hikers, families and tourists on board and it’s wheelchair accessible as well.

The Lady of the Lake is named after the poem written by Walter Scott and thanks to its heated saloon it sails all year round. Cyclists and dog walkers are also welcomed.

I visited Loch Katrine at the end of November so I took the 1-hour cruise. I got the chance to have wonderful panoramic views of the Trossachs mountains – especially Ben Venue (729 m) and Ben A’an (461 m) – around the loch. I also saw Brenachoile Point, a stunning viewpoint that was chosen as a filming location for Outlander Tv Series, in episode 13 of Season 2 “Dragonfly in Amber”. The scene is set in 1968, when Roger and Brianna talk about the past whilst having a picnic.

Have a walk is the best way to enjoy beautiful Loch Katrine’s surroundings thanks to many short or longer paths suitable for everyone. Please remember that mobile phone signal is quite weak in the whole area.

In the first excursion I explored the north side of the loch, reaching Primrose Hill. Leaving from Trossachs Pier, the first part of the walk is along the private road that goes around the loch while passing a group of islands. One of this is Eilean Molach, immortalised by Walter Scott in his poem Lady of the Lake. Then the path continues on the right with zig-zags through the woods. The climb leads to a forest track with super views across the loch as well as the Arrochar Alps in the far distance.

When a larger track is reached keep the right up to the deer fence. After the gate follow the path downhill across the trees. Watch out for the left turn, then take it as you will be back to the private road along the loch.

Trossachs Pier is 4 Km away from here. Remember to detour onto Brenachoille Point, a nice grassy promontory – and an Outlander filming location – with amazing sights across Loch Katrine.

In the other excursion I walked up to Ben A’an, one of the most popular amongst Scotland’s smaller hills (461 m). Considered as the mountain in miniature, the path is steep though it has recently been rebuilt. The walk begins from the car park, which is located close to Loch Achray and a 20 minute walk from Trossachs Pier.

Once you reach the pyramidal peak of the hill, the reward for the effort made is a truly wonderful viewpoint over Loch Katrine, Loch Achray and all the mountains around.

More details about these walks and the full itineraries are availabe at walkhighlands.co.uk.

Another very popular route is the coastal path along the shores of Loch Katrine, from Stronachlachar to Trossachs Pier (14 miles – 22 Km). Hikers and cyclists may board to one of the boats sailing to Stronachlachar and then exploring the north side of the loch. This is the area where Rob Roby, one of Scotland’s most famous historical figures, was born in 1671. He’s buried near Balquhidder Church (22 miles away) whiles his family’s grave is in Glengyle, at the head of Loch Katrine. Just before approaching Stronachlachar, the Factor’s Island appears well visible from the the vessel. Rob Roby imprisoned the factor of the Duke of Montrose there for 5-6 days during his long dispute with that nobleman. The wall around the island was erected in 1859, indeed the level of the water had to be erased as Loch Katrine became water supply for the city of Glasgow.

Where to stay near Loch Katrine

To make your visit to Loch Lomond & Trossachs National Park even more special, I suggest an overnight stay (or longer) on the banks of Loch Katrine. A new dedicated area for campervans, eco lodges and tents has been recently created a few steps away from Trossachs Pier.

I stayed in one of these 8 lodges, overlooking the lake and Ben Venue. All these structures are names after local lochs and mountains.

Loch lodges welcome a maximum of four people and include amenities such as luxury bed linen and towels, en-suite facilities, kitchenette with combo microwave, a deck area with picnic table and a 20% discount on cruise sailings. Loch Venachar is also dog friendly.

Ben lodges are non ensuite so share facilities in the toilet and shower block on site. Two of them, Ben A’an and Ben Ledi, are dog friendly.

Reception is open 9-17, in low season it closes one hour earlier. If you plan to arrive later you must contact it in advance to get the access code for the key. A £50 security deposit has to be be paid when checking in or in advance for out of hours arrivals. A free WiFi connection is available throughout the area during the day. Then, from 17 to 9 there’s another dedicated WiFi access for guests.

The Steamship Cafe is situated in front of the pier and next to the lodges. Breakfast is available from 9:15 to 12, it offers a selection of locally sourced fresh food (also to take away) and afternoon teas. During high season it’s open from 9:15 to 17:15, in low season from 9 to 16. The cafe has a lift so it’s wheelchair accessible.

How to get to Loch Katrine without a car

Located on the River Teith, the town of Callander is often described as the gateway to the Highlands and it’s also a popular base for tourists exploring the Loch Lomond & Trossachs National Park.

Unfortunately there’re no bus services between Callander and Loch Katrine. However, if you don’t have your own car or don’t want to rent it, there’re two options available:

For more information about Loch Katrine, cruises, accommodation please check its website or send an email at enquiries@lochkatrine.com.