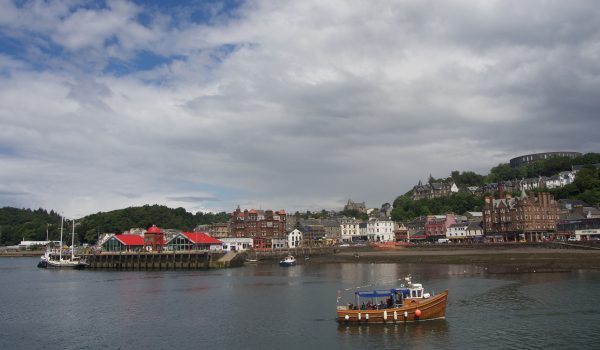 Oban, the 8 things to do and see in the seafood capital of Scotland

One of the places not to be missed during a trip to Scotland is definitely Oban, within the Argyll and Bute council area. I went there in June 2016 and I stayed four days, quite enough to visit the town and its surroundings. So I had the chance to learn more about the local historical and natural heritage visiting castles, abbeys, landmarks and travelling to the Inner Hebrides.

Lots of day and multi-day tours from Glasgow and Edinburgh stop here all year round, offering you the chance to experience what Oban has to offer. The full list is available here.

Having said that, there’re (at least) 8 things to do and see in Oban that I want to share with you.

1) Have a stroll along Oban bay

It’s the area where I spent most of my time, enjoying the amazing view over the Firth of Lorn, the islands of Kerrera, Lismore and the Isle of Mull. The Oban bay is the perfect place where to go for a relaxing walk at any time of day, though I have to admit that the landscape at sunset is unbeatable!

Besides that, from the seafront is very easy to reach the local places of interest. For example the neo-Gothic St. Columba’s Cathedral, the main church of the county that was built between 1932 and 1959. Few metres later, located on the other side of the street there’s the Oban War Memorial, a sculpture depicting two soldiers from the Highland division while carrying one of their wounded comrades.

The road continues towards Dunollie Castle, which unfortunately I couldn’t visit as I arrived there after closing time. During the walk don’t miss the green area where you can see the Dunollie Lighthouse, a small building located in a wonderful panoramic spot.

2) Go for a whisky taste at Oban Distillery

Opened in 1794, the Oban Distillery is one of the oldest in Scotland as well as one of the smallest having just two pot stills.

It’s possible to visit it with a guided tour during which you’ll learn all about the malt whisky making process and its unique taste, including a complimentary dram of the Oban 14 year old West Highland Malt. For more details related to this whisky experience please visit the official website.

3) Walk up to McCaig’s Tower

From the seafront you may spot a strange building that looks like the Roman colosseum dominating the skyline. That’s actually the McCaig’s Tower, built between 1895-1902 and commissioned by John Stuart McCaig. His aim – apart from realising a monument dedicated to his family – was to give work to local stonemasons during winter time.

Unfortunately, when the man passed away the building wasn’t completed but his family members decided to give up the project. So the “tower” we see today hasn’t changed since 1902 and it has become a popular attraction in the area. Indeed, from the top of the hill you have a breathtaking view over Oban and the Firth of Lorn.

4) Reach the top of Pulpit Hill

Like the McCaig’s Tower, Pulpit Hill is a stunning viewpoint in Oban that is located in the south side of the city. I’d say it’s less “touristy”, that means you can enjoy the panorama more peacefully.

I spent around half an hour on the top of the hill looking the bay, especially Kerrera, the closest island among all the ones situated in the Firth of Lorn. The hill is easily reachable from the centre with a walk of around 20 minutes. Starting from the harbour you have just to follow the signposts. You can get to the top even by car, in this case please take care as part of the road is a single track.

5) Pay a visit to the Island of Kerrera

Located so close to Oban there’s the Island of Kerrera, one of the Scottish Inner Hebrides. Spending a day here is an experience to be done as it’s seems like travelling back in time.

Indeed it looks like a different world, with very few houses, there’re almost no cars as the inhabitants are around 50. That means Kerrera is the perfect destination for families or walkers that can enjoy a 7 mile circuit. The most famous part of it is in the southern area, where a circular route allows you to walk among spectacular sceneries and look fantastic views of the mainland and the isle of Mull. The itinerary also includes the remains of Gylen Castle, built in 1587 by Duncan MacDougall of Dunollie, on the site of an earlier fortification and overlooking the Firth of Lorn. The fortress was restored in 2006 and now is open to the public.

Not far from the castle there’s the Kerrera Tea Garden & Bunkhouse, the only local “business” and accomodation.

The Kerrera ferry leaves from Gallanach, a little port situated a couple of miles from Oban‘s city centre. The service is operated by CalMac Ferries.

6) Take a day tour to the islands of Mull, Iona and Staffa

From Oban there’re available many day tours headed to the Inner Hebrides, especially to the islands of Mull, Iona and Staffa. In my case I went to the Three Isles Early Bird tour organised by West Coast Tours, leaving in early morning to avoid the peak season crowds. The itinerary was long and intense, including  bus and ferry transfers, but everything was really worthwhile.

First stop was on Mull, with a bus tour across the island with the chance to see its beautiful landscapes and the local wildlife. Then, the highlight of the day was definitely the boat trip to Staffa to visit the stunning Fingal’s Cave. This is a large sea cave cliffs of hexagonal basalt columns. I had time enough to visit it and then walk up to the grassy slopes trying to spot the puffins that nest here between May and September. Among the many personalities attracted to the beauty of Staffa we can mention Queen Victoria, Sir Walter Scott as well as Felix Mendelssohn, who expressed the wonder of this place through its famous “Hebrides Overture”.

Once I got to the beautiful Iona I first spent some time wandering along the white beach to enjoy the turquoise waters. Then, I decided to understand why this little island is known as the “The Cradle of Christianity” in Scotland. The Iona Abbey was found in 563 by St. Columba and it was the origin of the spread of Christianity in the nation. Besides that, it’s one of the oldest Christian religious centres in Western Europe. Apart from the abbey I suggest you to visit the local graveyard, which is supposed to be the burial site of more than 48 medieval Kings of Scotland, Ireland and Norway.

The last historical site I visited during my stay in Oban was Dunstaffnage Castle, located in a a strategic position overlooking Loch Etive and the sea. Involved in many battles – for example the besiege by Robert the Bruce around 1308 – and crucial events over the centuries, it played a key role in defending the Scotland‘s west coast.

The castle was built before 1240, probably by Duncan MacDougall, son of the Lord of Lorn. Today is one of Scotland’s oldest stone castles and I suggest you to spend at least one hour for the visit of the complex, including the 13th-century Chapel tucked away in the woodland. Dunstaffnage Castle is also famous as in 1476 welcomed Flora MacDonald, the Scottish heroine who helped Bonnie Prince Charlie to escape after the defeat in Culloden. The woman was arrested and remained in the castle for a couple of days before being moved to London. Finally she was released one year later.

The fortress is 3 miles far from Oban and you can get there even by public transport taking the bus service 405 operated by West Coast Motors. Dunstaffnage Castle is property of Historic Scotland so that you can enter for free if you have the Historic Scotland Explorer Pass.

Oban is largely renowned as the “Seafood Capital of Scotland“, that means that fish and shellfish are something definitely to try. Considering all the restaurants and fish & chips you can find in town, the choice maybe quite difficult.

Anyway, I personally recommend the “Oban Seafood Hut“, located near the Ferry Terminal and opened daily, from 10am to 6pm. I ate here a couple of times because it’s the perfect place where to have fresh fish that is also value for money. The menu is quite simple and includes lobster, oysters, sandwiches with smoked salmon, crab or prawn.

How to get to Oban

Oban is well connected to the main Scottish cities so that you can even arrive there by bus or train. Travelling from Glasgow and Edinburgh lasts around 3 hours while from Stirling is less than 2 hours. The journey itself is part of a full authentic Scottish experience as you will have spectacular views of landscapes as well as historical sites like Inveraray and Kilchurn Castle.

Scottish Citylink connects Glasgow Buchanan Bus Stn to Oban in around 3 hours with service 976 operated by West Coast Motors. Otherwise, ScotRail links Glasgow Queen Street Stn to Oban travelling along the world-famous West Highland Line. Please note that usually bus is cheaper than train while I always suggest to buy the tickets in advance in order to get the best deal possible.

Where to sleep in Oban

Finding an accomodation in Oban is not a problem at all as there’s plenty of choice of B&B, hotels, guesthouses and hostels where to stay. I can recommend you: