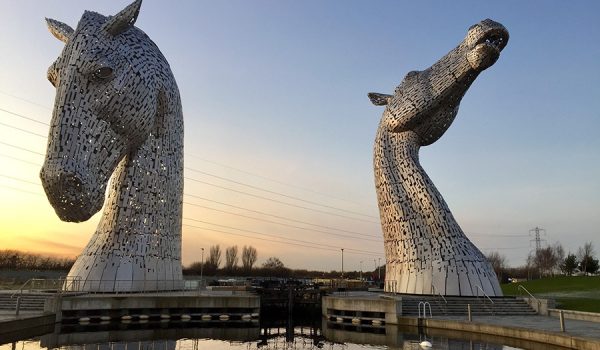 Falkirk (Scotland), the top 6 things to do and see in the area including the Kelpies, the Wheel and some Outlander filming locations

Located in the Central Lowlands of Scotland, Falkirk lies in the Forth Valley and midway between Edinburgh (37,5 Km) and Glasgow (33 Km). The area is steeped in history, it boasts a relevant cultural, natural and engineering heritage that attracts an increasing number of visitors from all over the world.

In addition to that, the city has en excellent motorway and rail links and the two international airports in Edinburgh and Glasgow are well reachable by train or bus. Further information are available here.

There’re many accomodations throughout the area, in my case I stayed in two different hotels: the Macdonald Inchyra Hotel & Spa in Polmont (4 miles from the town centre) and the Leapark Hotel in Grangemouth, ideally located on the way to Bo’ness.

The top 6 attractions to visit in Falkirk Area

Today, this destination is mainly famous for 2 of the world’s most unique attractions: the Falkirk Wheel and The Kelpies. However, you can also find historical dwellings as well as other places of interest related to the Scottish history.

Most of the attractions are situated outside Falkirk town centre but frequent bus services operated by First Bus and leaving from Newmarket Street allow tourists to easily reach them.

1. The Kelpies at Helix Park

The Kelpies is the world’s largest equine sculpture and it’s one of Scotland’s top attractions. They were designed in 2013 by sculptor Andy Scott, each structure measures around 30 m in height, it’s made of 464 steel plates and its weigh is over 300 tonnes. The 30-minute guided walking tour is the only way to get inside the monument to discover its history and engineering.

Though they look like beautiful and harmless horses, actually they represent some shape-shifting water spirits that – according to Celtic tradition – inhabit lochs and pools of the country.

The Kelpies are located in the heart of Helix Park, towering over the Forth & Clyde Canal at its entrance point on the east coast of Scotland. The area is a new 350 hectares of green land with a play park, a lagoon for water sports, many cycling and walking paths and a Visitor Centre that includes a cafe/gift shop and an exhibition space. The Helix Car Park has access 24/7 and it’s free of charge.

The Kelpies are approximately 2 miles away from Falkirk town centre and the best way to get there is by bus (services n. 2 and 4).

2. The Falkirk Wheel and Rough Castle

Another symbol of this area is the Falkirk Wheel, the world’s only rotating boat lift connecting the Forth & Clide Canal from Glasgow with the Union Canal running from Edinburgh. Opened in 2002 by Queen Elizabeth, this magnificent structure is considered Scotland’s most exciting example of 21st century engineering.

The Falkirk Wheel is the perfect destination for a family day out with play areas, boat trips, woodland walks, many events throughout the year while cafe and quality foods are served in the Visitor Centre.

Local trails – both for cyclists and walkers – follow the path of the Antonine Wall, the north-western frontier of the Roman Empire. It was built around AD142 and it stretched across Scotland, from west to east. It’s a UNESCO World Heritage Site since 2005 and luckily some of its best sections are visible around Falkirk Area.

For example, with a 20-25 minute walk from the Wheels it’s possible to reach Rough Castle, the second-smallest fort on the wall but the one in the best state of preservation. Once there it’s possible to see the tallest surviving section of rampart, a part of the Military Way along the wall, ditches and gateways as well as fort and other defences.

Getting to Falkirk Wheel and Rough Castle from the town centre is very easy and convenient. Journey time is about 20 minutes, bus services 1 & 6 operated by First Bus stop in front of the Visitor Centre.

3. The Battle of Falkirk Muir Trail

This battle was fought on the afternoon of 17th January 1746 on the grounds that today are part of Callendar Estate. It involved more men than any other combat during the 1745 Jacobite uprising – approx. 8000 units on each side – but it only lasted about half an hour.

It also was the last significant Jacobite success before their final defeat at Culloden Moor in April 1746. Indeed, Bonnie Prince Charlie’s army was unable to capitalise on that victory as the Government forces managed to withdraw to Edinburgh without considerable loss. On the other side, the jacobites failed to conquer Stirling Castle and then retreated into the Highlands.

The Battle of Falkirk Trail is a 4 Km free guided walk through history. Several information boards outline the key places as well as the main events of that day. For example, Charlie’s Hill is the vantage point from where Bonnie Prince Charlie – also known as the Young Pretender – was able to check how the battle was fought and then to give useful information to his army.

The Battle of Falkirk Monument was erected in 1927 on the site where Lord George Murray ordered his regiments to march south to north to form the front line of the Jacobite army. Then, the itinerary continues across the terrain where Lord George Murray’s army and the Governative dragoons clashed. Jacobites had less military experience but definitely a better knowledge of the area so that allowed them to beat the Hanoverian troops back.

There’re many access to the trail. My personal recommendation is from the starting point at the Cafe at Canada Wood. You can reach it from Falkirk town centre by bus, taking the no. 6 – the same one headed to the Wheel – and getting off at Tamfourhill, on Carradale Avenue. Once there it takes a 25-30 minute walk across the woodland to the Cafe.

The palace is located near Falkirk town centre, surrounded by a wonderful park featuring a children play area, picnic tables, snacks kiosk, golf course and waymarked trails. Besides that, the Estate also contains a section of the Roman Antonine Wall.

Callendar House is a French chateau styled building which dates back to 14th century. Historical figures such as Mary Queen of Scots, Cromwell and Bonnie Prince Charlie stayed here.

Unfortunately, private rooms are not open to public. Anyway, the house hosts contemporary visual art exhibitions, a Tearoom overlooking the park and a museum dedicated to the history of Falkirk Area from 11to the 19th centuries. Having said that, the restored 1825 Kitchen with costumed interpreters providing samples of food of that time is the main tourist attraction. Especially since then it was used as a film location for the Outlander Tv Series. The Georgian Kitchen appears as Duke of Sandringham’s house in the 11th episode of season 2, “Vengeance is Mine”, in the scene in which Murtagh decapitates the English Duke.

There’re two free guided walks across the town centre that allow to discover the history of Falkirk. Both tours last around one hour and depart from the Steeple.

The current bell tower was erected in 1814 and it has been used in many ways over the years. The first steeple was built between 16th-17th centuries, the second one was then demolished in 1803. The building has always been a local landmark and a vital part of town life and community identity and still it is today.

Few metres away from the Steeple, the Howgate Shopping Centre is another suggested stop along the trail. Indeed, the stained glass windows that were made in 1860 to commemorate the Jacobite success at the battle of Falkirk are on display on its lower floor. They come from South Bantaskine House – not far from Falkirk battlefield – representing Bonnie Prince Charlie in the centre, Lord George Murray on his right and Lord John Drummond on his left.

Another place of interest is the Falkirk Trinity Church, built in 1811 on the ground where the first church was erected between the 7th-11th centuries. From its name, Faw Kirk, would derive the name of the town. In the graveyard there’re memorials dedicated to Scottish figures. For example Sir John de Graeme, who fought alongside William Wallace and died during the Battle of Falkirk in July 1298. According to the legend, it was the scottish hero himself who buried his friend here.

All the information concerning the Falkirk Town Heritage Trail are available on this page.

The area also offers plenty of choice for places where to eat. I can recommend you The Finnegans, offering quality and affordable breakfasts, sandwiches, bakings, lunches and coffee; and Behind The Wall, serving Scottish and international food – including the delicious pizza pad – together with a wide range of whisky brands.

I spent a whole day exploring this village that overlooks the Firth of Forth and located 12 Km far from Falkirk. Its main attraction is the Bo’ness & Kinneil Railway Station, a heritage railway in which visitors have the chance to board a vintage steam or diesel-hauled train.

It’s managed by volunteers, it’s open weekends from April to October and midweek days during school holidays. Special events for families with children take place across the year, for example the Santa Train in December.

Bo’ness Railway Station appeared as a film location in Outlander Tv Series in the third episode of Season 1, when Frank and Claire say their goodbye at the London railway station before leaving for the II World War. Whilst here I recommend a visit of the Museum of Scottish Railway, the Scotland’s largest railway museum in which full size locomotives and old fashioned railway signs are on display.

Designed by architect Matthew Steele and opened in 1912 in the centre of Bo’ness, The Hippodrome is Scotland’s oldest purpose-built cinema. This beautiful pre-art deco picture palace has been accurately restored in the last years. Today it screens the latest releases, classic films, autistic friendly viewings and films for children as well.

Each March the Hippodrome is home of the Silent Film Festival. A long weekend of film gems including silent-era, talks about early cinema pioneers and world-class live music.

The last stop of the itinerary in Bo’ness is at Kinneil Estate, an area packed with history as visitors can see a section of the Antonine Wall and its fort as well as some remains of the medieval church of the old village.

Located in the heart of the park, Kinneil House is a stunning historic country residence and property of the Dukes of Hamilton from 1323 to 1922. It’s open on selected days throughout the year and visits are available just with guided tour. These allow to discover the fascinating story of the estate and to enjoy the beautiful Renaissance wall paintings, considered the best in Scotland.

Kinneill Museum hosts an exhibition focused on the 2.000 years of history of the area, from Roman times to the present day. Antoninus Pius, Mary Queen of Scots and James Watt are some of the historical characters that visited Kinneill. Speaking of the Scottish inventor, the workshop where he worked to the development of the steam engine is still visibile next to the House.

Bus n. 2 operated by First connects Falkirk to Kinneil and Bo’ness with frequent daily services in around 35-40 minutes.