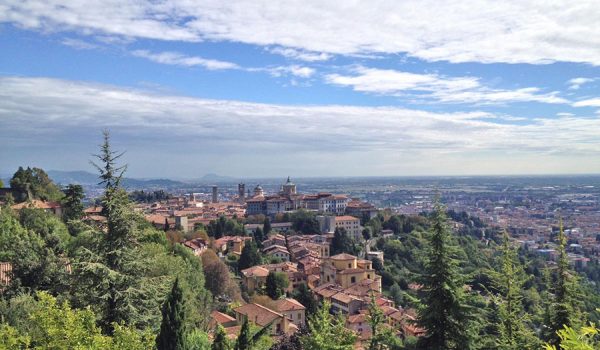 Bergamo (northern Italy): how to arrive, where to stay near the Airport and the 5 top things to do and see in one or more days

Located in the centre of Lombardy and around 50 Km far from Milan, Bergamo is a city that surprise every visitor for the beauty of its “two centres”: the Città Alta and the Città Bassa.

Bergamo is the second most visited city in Lombardy after Milan and since July 2017 it also features a UNESCO World Heritage Site. Gaetano Donizetti, considered as one of the most important composers of all time, was born in Bergamo in 1797.

How to get to Bergamo and where to stay

Getting to Bergamo is very easy as it is well connected to other cities such as Milan, Turin and Venice.

You can reach Bergamo by motorway A4 or by public transport. The Bergamo Railway Station is directly linked to Milan, Lecco and Brescia (with further connections for Lake Garda, Verona, and Venice). Bus services from Milan are also available.

Bergamo Orio al Serio Airport is the third busiest international airport in Italy and it is mainly known for being Ryanair’s third top base (behind Dublin and London Stansted) serving around 80 destinations across Europe.

There is a bus shuttle service linking Orio al Serio Airport to Bergamo city centre. All information are available here.

Having said that, the accommodation in Bergamo I can recommend to you is “Residenza Il Fiore”. This was the perfect starting point for my city tour as it is situated in a strategic position close to Bergamo Orio al Serio airport and just 10 minutes on foot to the historic centre and the train station.

For all details and online booking check this page.

5 things to do and see in Bergamo: exploring the “Sentierone”

My itinerary begins in Bergamo Bassa, which is the modern city centre built since the end of the 19th century.

The so-called “Sentierone” is a tree-lined avenue featuring an elegant arcade adorned with marble decorations and full of shops and cafes. The theatre dedicated to Gaetano Donizetti stands on the other side of the road whilst at the eastern end of the street you can admire the monumental façade of the Church of Saints Bartolomeo and Stefano which dates back to the first half of the 17th century.

The Sentierone is one of the main places of interest included in the private tour of the Lower Town. For all details and to book this activity please click here.

Via XX Settembre is a pedestrian street stretching on the left side of the Sentierone up to Piazza Pontida and it is locally known as “Bergamo’s Via Montenapoleone” for its luxury shops.

My personal tip. To get a nice urban sight of Bergamo “lower city” and the Sentierone just go to Piazza Vittorio Veneto, a beautiful square with two neoclassical buildings from where you can also spot the “upper town” standing on the top of the hill in the background.

5 things to do and see in Bergamo: have a walk along the Venetian Walls

The “upper town” (Città Alta) is the Bergamo old town and it’s entirely surrounded by a defensive system erected by the Republic of Venice during the 16 century and remained almost intact through the ages.

The Venetian Walls are over 6 Km long and are made of 14 bastions, 2 platforms, 100 embrasures for cannons, 2 armouries and 4 gates. UNESCO recognized them as a World Heritage Site on 9 July 2017. The Gate of San Giacomo, with the Lion of San Marco on its façade, is the perfect spot where to have a gorgeous panorama of the Lower Bergamo.

There are private walking tours in english that allow tourists to have a walk along these walls and then visit the upper town of Bergamo. For all information take a look at this page.

You can get to Città Alta by the Funicular leaving from Viale Vittorio Emanuele II, 62 and arriving to Piazza Mercato delle Scarpe, the local shoes market square since 1430.

Otherwise, a lovely and easy walk starts from Via Pignolo up to Sant’Agostino gate. Once there enjoy a panoramic view from the former monastery and the ex Church of Sant’Agostino which today house a branch of Bergamo University and a Lecture Hall.

5 things to do and see in Bergamo: walk up to San Vigilio castle

From the ex Church of Sant’Agostino the itinerary continues up to Colle San Vigilio (496 m a.s.l.), a panoramic hill overlooking the Città Alta and dominated by the Castle of San Vigilio. This used to be the residence of Bergamo’s numerous rulers for centuries and for this reason it’s located in a strategic position in case of attacks.

You can arrive to San Vigilio also by taking the funicular from Piazza Mercato delle Scarpe in the “Upper town”. Before or after reaching the fortress I suggest you to take a detour towards Via Borgo Canale 14, where you can see Gaetano Donizetti’s birthplace.

His family’s first house was in the basement of a five-storey building dating back to medieval times. It was purchased by the Municipality of Bergamo in 1925 and it was declared a National Monument one year later.

“However, my birth was more secret, as I was born (sic) underground in Borgo Canale. You had to go down along a cellar staircase, where no light had ever entered. And I took flight, just like an owl…”

For more information about opening times and prices check this website.

5 things to do and see in Bergamo: visit of the Fortress

The Rocca is one of the Bergamasco people’s favourite places where to go to enjoy 360° stunning views over the Upper town, the Orobie Prealps, the entire plain as well as Milan’s skyline in case of clear sky.

The fortress was erected during the 14th century and traces of its military function are still visible today. The bomber’s house hosts the “nineteenth century Museum” dedicated to the history of Bergamo between the old regime and the Italian unification.

5 things to do and see in Bergamo: fall in love with Piazza Vecchia and Piazza del Duomo

“You can’t move a single stone, it would be a crime.”

Full of history, since Ancient Rome to nowadays, Piazza Vecchia is the heart of the Upper Town (Città Alta). It used to be the symbol of political power for centuries and today is one of inhabitants’ favourite places where to meet up and spend some time together.

Look around you to admire:

Piazza Duomo is the religious heart of Bergamo old town and take its name from the impressive cathedral that overlooks it, situated opposite the baptistery, the bishop’s palace and the Basilica of Santa Maria Maggiore with the tomb of Gaetano Donizetti located on its rear wall.

Before Piazza Vecchia was erected by the Republic of Venice, this area served as city’s medieval square in which trades and negotiations took place.

To discover the history and all the secrets of Bergamo old town you can join private walking tours that start from the Fontana Contarini in Piazza Vecchia and include the visit of the Duomo and the Basilica of Santa Maria Maggiore. The itinerary ends near San Giacomo Gate, along the Venetian Walls.

Click here for all details and to book the tour in advance.