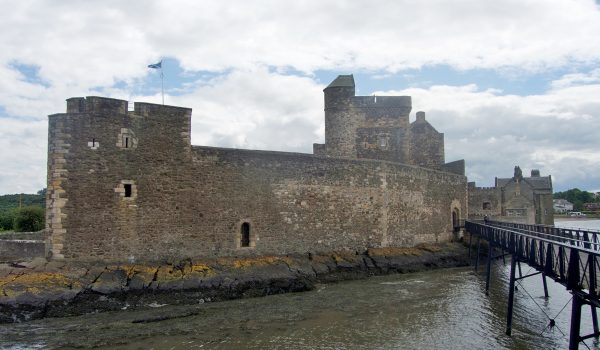 The tv series Outlander, based on Diana Gabaldon’s novels, is nowaydays famous worldwide. It attracts thousands and thousands of tourists – and fans – that come to Scotland to relive the adventures of Jamie and Claire visiting the locations featured on the screen.

The aim of this article is to help you to spot some of them, especially the ones situated just around Edinburgh and easily reachable by public transport. Otherwise, you can join a guided tour leaving from Edinburgh and Glasgow, for the full list and bookings please check this page.

The 5 Outlander set locations to visit near Edinburgh

This itineary will also allow you to learn more about Scottish history and appreciate its rich heritage. Besides that, it could be a valid idea for an excursion during your stay in Edinburgh. Don’t worry if you don’t want to rent a car, the sites are well connected to the Scottish capital by train and/or bus.

Often considered as Edinburgh’s other castle, Craigmillar Castle is located just 3 miles southeast of the city centre. The medieval building dates back to the late 14th century and is one of the best-preserved throughout Scotland. It’s particularly famous as Mary Queen of Scots stayed here in 1566 to recover from the illness after the birth of her son, the future James VI. Among the things to do and see, I suggest you to climb the tower house to enjoy the fantastic panoramic view… you may spot Edinburgh Castle and other local landmarks.

Craigmillar Castle appears in Outlander Season 3 in ep. 3 ‘All Debts Paid’ as Ardsmuir Prison. After the defeat at Culloden Moor, Jamie and other highland jacobites are imprisoned here under the control of Lord John Grey. 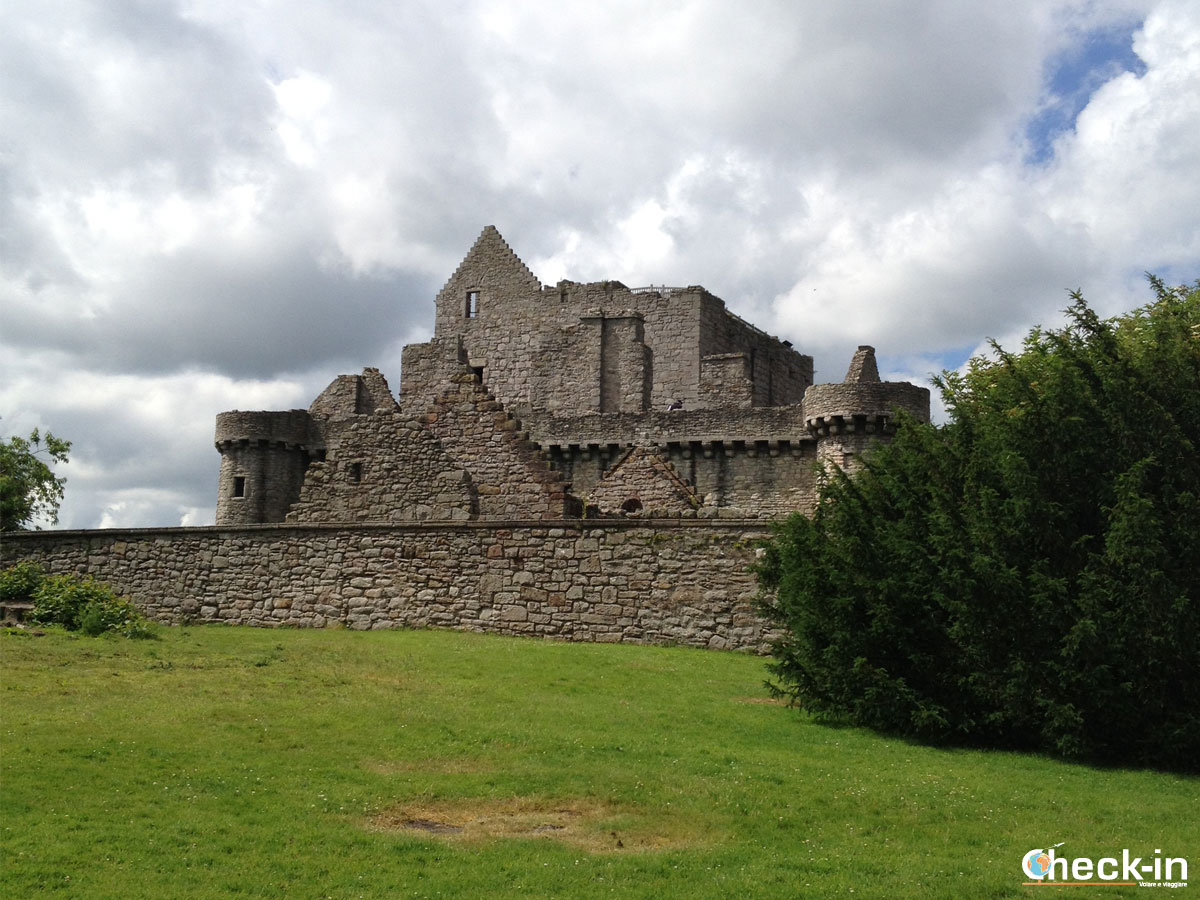 Unless you like walking few miles from the city, the best way to reach Craigmillar Castle is by bus. Indeed, the Lothian Buses n. 14 takes around 30 minutes from North Bridge. A single ticket costs £1.70 and you have to pay onboard. Please note the drivers don’t give change.

The castle is property of Historic Scotland and the fares are the following:

Let’s leave Edinburgh headed to the beautiful Royal Burgh of Linlithgow, situated 15 miles west of the capital. During the 15th and 16th centuries the palace was the birthplace of several Scottish Monarchs including Mary Queen of Scots. For this reason was also one of the principal residences of the Kings and Queens of Scotland until 1603, when James VI moved the royal court to London and was crowned as James I of England.

Outlander Seasons 1, Linlithgow Palace was the location of the Wentworth Prison, where Jamie is tortured and raped by his enemy Captain Black Jack Randall. 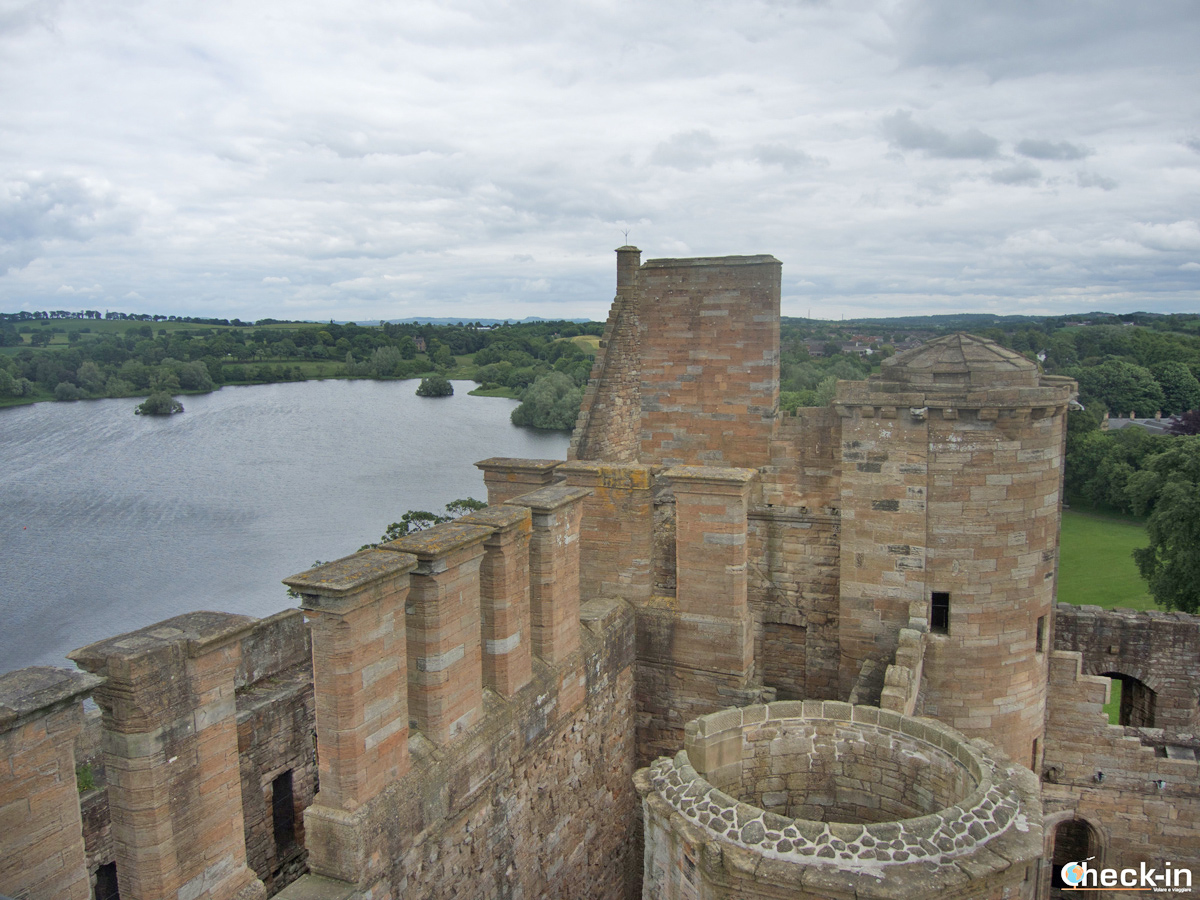 How to arrive there, fares and opening times

The easiest way is to reach Linlithgow by train from Edinburgh Waverley. The journey takes less than 30 minutes and the local train station is just a few steps away from the palace. In any case, for more information about prices and scheduled services please check ScotRail website.

It’s one of my favourite Scottish castles and its beauty is due to the curious shape of the fortification. As a matter of fact, Blackness Castle is also known as the “ship that never sailed” overlooking the Firth of Forth. The fortress was built by Crichton family during the 15th century and since then it has been used as a royal castle, prison and weapons store as well.

Nowadays, its popularity has increased quite significantly thanks to tv series Outlander appearances. Indeed, in Season 1 it represents Fort William, then the place where Jamie is being punished by Black Jack Randall and later on the highlander returns here to rescue Claire from Black Jack. Later on, you can see again the fortress at the end of Season 2 when Brianna and Roger visit it and the guy tells more about the history of the place. 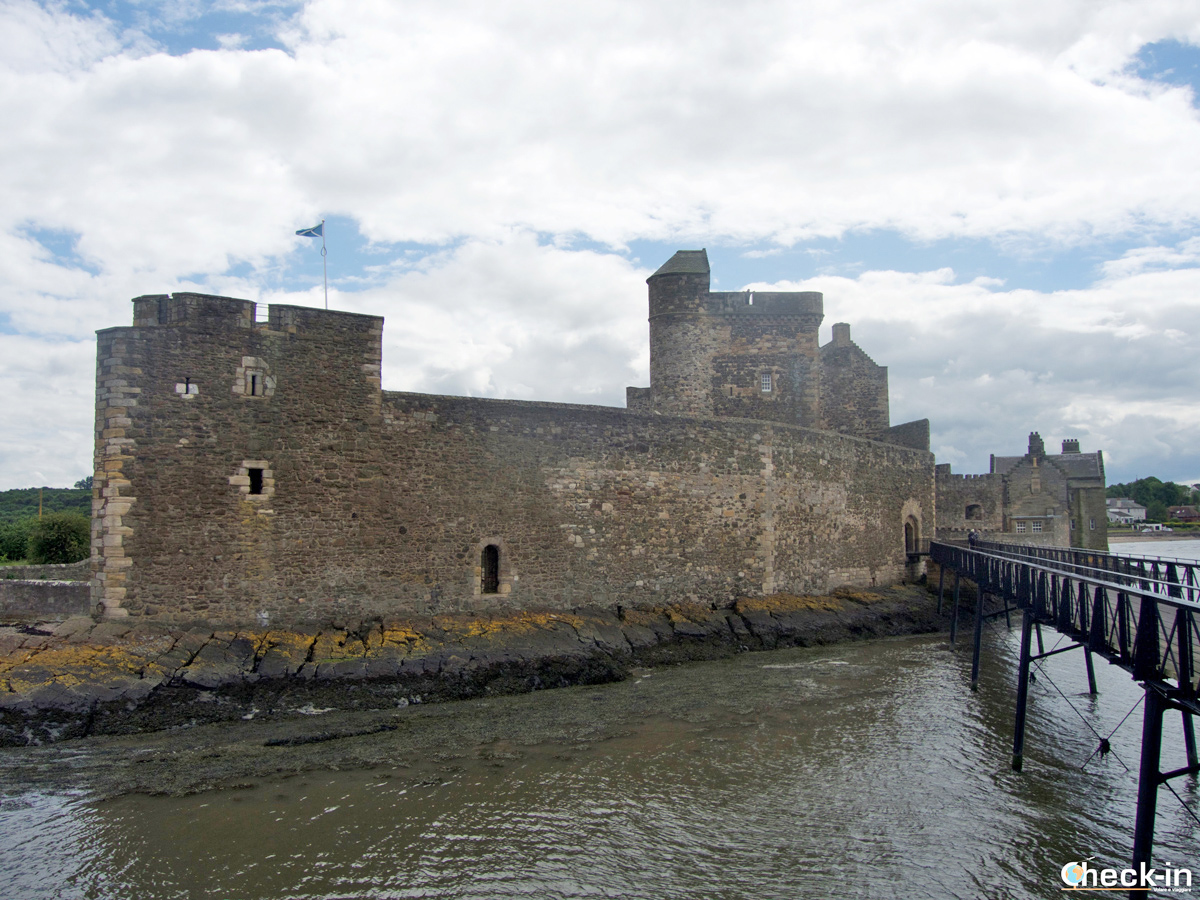 Blackness Castle is located a few miles from Linlithgow Palace that means you could see both in one day. I did so and I recommend it as the bus’ timetables give you time enough to visit them. I would start from the palace in the morning and then reaching the castle in the afternoon. Finally, you can return to Linlithgow and take the train back to Edinburgh.

It’s even possible to travel from Edinburgh to Blackness but there’re very few direct connections so that you may have to change in Linlithgow anyway.

Historic Scotland takes care of Blackness Castle and below you have the princes:

Let’s move now to the other side of the Firth of Forth to reach Aberdour, in the Kingdom of Fife. Here you can visit one of the oldest standing castle survived in Scotland. Dated back to the 1100s, Aberdour Castle was the home of many generations of three different noble families. What we (still) see today is the result of the addition of several buildings across the centuries, from the 12th to the 17th. Before leaving the site pay a visit to St Fillan’s Church, considered an interesting example of a typical Norman church of the 1100s.

Aberdour Castle was featured in Outlander last episode of Season 1 as the Abbey Ste. Anne de Beaupré, the Benedictine monastery where Jamie tries to recover from his injuries after having being prisoner at Wentworth under Captain Black Jack Randall. 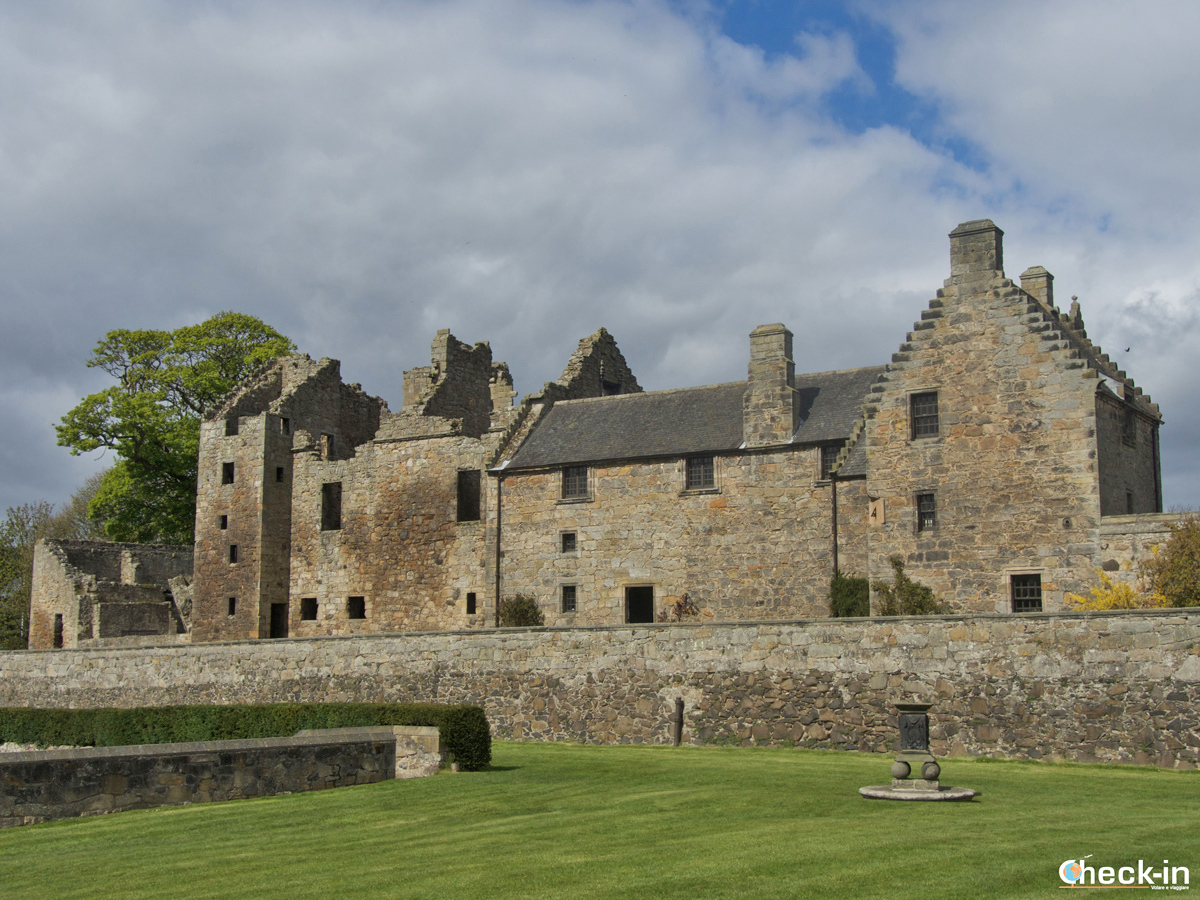 How to arrive there, fares and opening times

There’re regular train services from Edinburgh Waverley arriving to Aberdour in less than 40 minutes. The castle is just few steps away from the local train station. Like for the previous sites, even this one is run by Historic Scotland.

Possibly one of the most famous castles of central Scotland, it was the house of the Scotland’s uncrowned king Robert Stewart, 1st Duke of Albany and Governor of the country. He bought this property in 1361 when he married the Countess of Menteith, Margaret Graham. Throughout the history, Doune Castle has never had the same importance as Edinburgh or Stirling Castles, especially after James VI left for London in 1603.

Nowadays, the fortress is a very popular filming location and you may have seen it in Monty Python, the Holy Grail, Game of Thrones and then Outlander. Indeed, known as Castle Leoch, is the home of Clan Mackenzie and in Season 1 is the place where many relevant characters – like for example Murtagh, Laoghaire and Colum – are introduced. 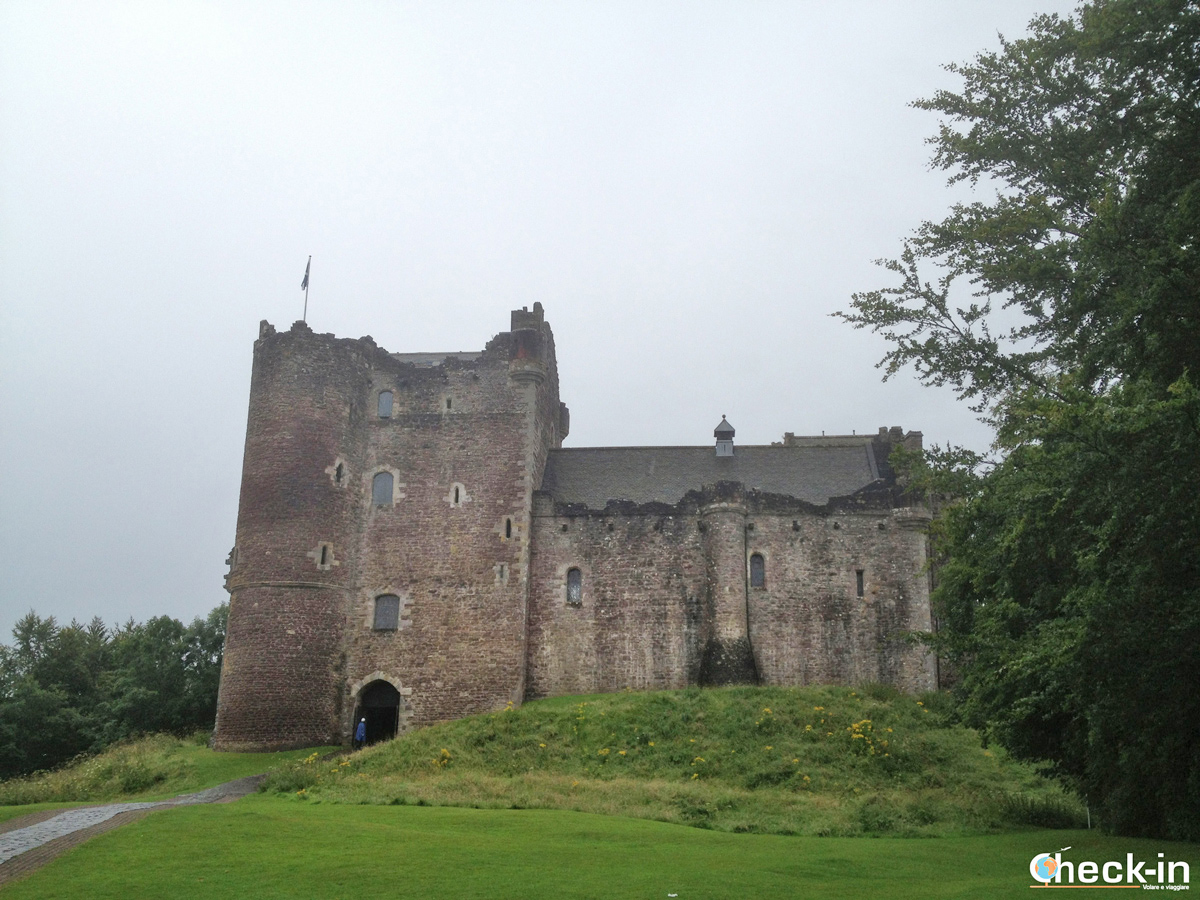 The best way to reach Doune Castle from Edinburgh is by taking the train from Waverley to Stirling and then the bus headed to the little village of Doune. The full journey lasts around 2 hours.

The site is managed by Historic Scotland so the prices are the same as for the others:

My personal tips for the visit

Based on my experience, you can easily see Linlithgow Palace and Blackness Castle in one day, you’ll have plenty of time to get the most of both and then returning to Edinburgh by train. You can add the visit of Craigmillar Castle as a morning or afternoon activity during your stay in town.

All these sites are managed by Historic Scotland, the official organisation responsible for many of the country’s castles, palaces, abbeys and prehistoric sites. For this reason it’s available the Historic Scotland Explorer Pass that includes the access to more than 70 attractions across the nation. Depending on your interests and the number of the castles and palaces you want to see, this tourist pass may help you to save some money comparing to the single tickets.

Then, I suggest you to check any unexpected closure of the properties before travelling. Finally, to plan your journeys and for any other information related to public transport please refer to Traveline Scotland.

The best “Outlander Day Tours” from Glasgow and Edinburgh